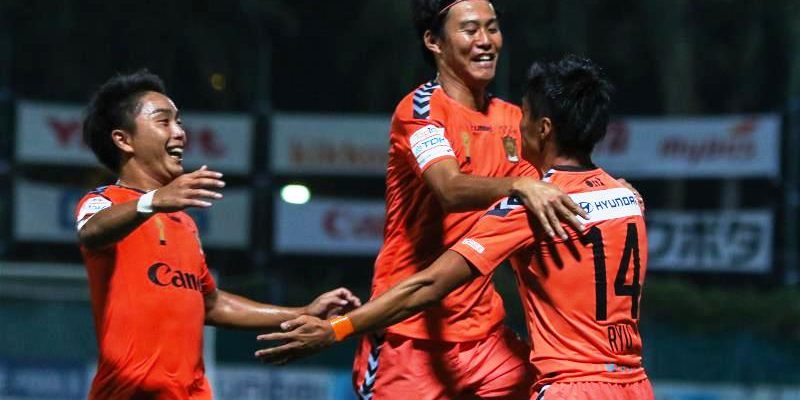 It was the White Swans’ third victory on the trot in the Great Eastern-Hyundai S.League as the result also saw them replace Home United at the summit and go three points clear.

Both sides made personnel changes for the match, with Yuuki Yamanouchi and Tomoki Menda coming in for Motoda and Shoichiro Sakamoto for Albirex, while Yura Indera Putera took the place of the injured Francois Marque for DPMM.

The first-half was a tightly-contested affair, with the first chance of note coming on nine minutes, but Azwan Saleh’s effort from 20 yards was comfortably caught by Albirex custodian Yosuke Nozawa.

At the other end three minutes later, Tsubasa Sano could have put the hosts ahead, but scuffed his shot on the edge of the six-yard box after he was teed up by Kento Nagasaki.

The Wasps were presented with a glorious opportunity to open the scoring just before the half-hour mark. Billy Mehmet rose highest to meet Rosmin Kamis’ right-wing cross, but saw his header came off the foot of the post.

Rafael Ramazotti then headed wide in the 37th minute, before Yuuki Yamanouchi grazed the bar with a cross-shot from a tight angle on the stroke of half-time.

After the restart, Albirex were unlucky not to have scored as Yasutaka Yanagi and Takuya Akiyama were both denied by Wardun and the woodwork on 50th and 51st minutes respectively.

In the 71st minute, substitute Shochiro Sakamoto came close when he left his man for dead down the right before cutting in, but his low drive at goal found only the side-netting.

The deadlock was however, broken with sixteen minutes remaining. Motoda – who had only been on the pitch for three minutes – made a late run into the box to connect with Naofumi Tanaka’s cross from the left before sending a diving header past Wardun to put Albirex in front.

Try as they might, but all hopes of a DPMM comeback were extinguished when Nakai netted three minutes from time. Taking down a long ball, the 22-year-old then slotted past an onrushing Wardun to seal the victory for Albirex.

In an attempt to salvage something from the game, DPMM head coach Steve Kean brought on brothers Shahrazen Said and Adi Said shortly after, but it was in vain as Albirex hung on for the three points.