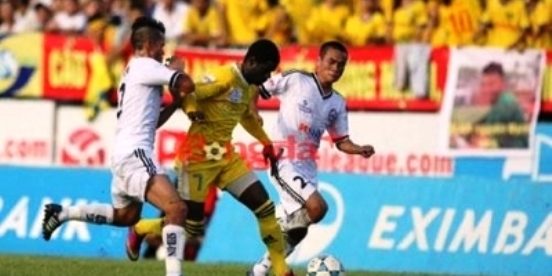 HANOI (30 Aug 2013) – Following the pullout and subsequent suspension of Xuân Thành Sài Gòn FC, the title of overall champions of V-League Eximbank 2013 has gone into the hands of Hanoi T&T.

And this week, Hanoi T&T made sure of the crown when they beat Dong Tam Long An 2-1 to amass a total of 37 points – four points ahead of second-placed Song Lam Nghe An.

Hanoi T&T went ahead early in the fifth minute off a header from midfielder Nguyen Ngoc Duy before V-League top scorer Samson Kayode from Nigeria made sure of a 2-0 goal advantage with the second goal just before the break.

Dong Tam Long An fought harder into the second half but failed to get the equalizer up until the 85th minute when substitute Juanuario France Cleiton headed in from close range.

Elsewhere, defending champions SHB Da Nang fell to a 2-1 loss at the Vinh Stadium to Song Lam Nghe An while Kienlongbank Kien Giang battled to a 1-1 draw to Dong Nai while Vissai Ninh Binh crashed to a 4-1 loss to Vicem Hai Phong.

In the meantime, the Vietnam Football Federation (VFF) announced this week that club Xuan Thanh Sai Gon (XTSG) have been handed a fine of VND100 million (USD 4,700) and where they will have to play in the Third Division until 2014.

XTSG chairman Nguyen Xuan Thuy was also given a fine of VND5 million and banned from being involved in any form of football management for five years.

XTSG boycotted the V-League after refusing to play the two remaining matches following their protest for points deduction.