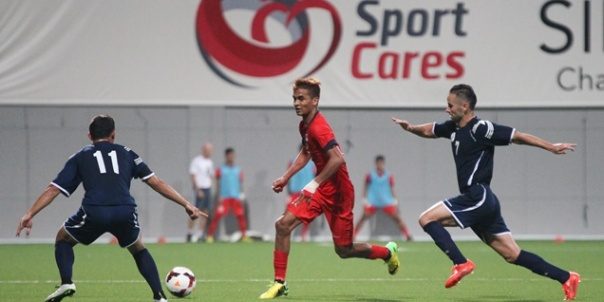 SINGAPORE (1 April 2015) – Guam presented to be more than a handful for Singapore as it forced the latter to come back twice before they were able to register a 2-2 draw in a friendly that was played at the Jalan Besar Stadium last night.

Shawn Nicklaw gave Guam the lead after 37 minutes when he weaved past two defenders before slotting it past Izwan Mahbud.

With the score 1-0 to Guam at the start of the second half, the hosts then came back with the equaliser in the 53rd minute of play when Faris Ramli nodded in the cross from Ismadi Mukhtar.

Jason Cunliffe than restored Guam’s lead in the 73rd minute before the Lions scrambled to save their pride at home with the second equaliser seven minutes later through Baihakki Khaizan.

“Result could be better, but the way we played is the way I like my team to play. We are not down,” said Singapore coach Bernd Stange.

“You don’t see me very happy, but we did our job and we came back. If a team gives everything over 90 minutes, you shouldn’t be too disappointed as a coach.”