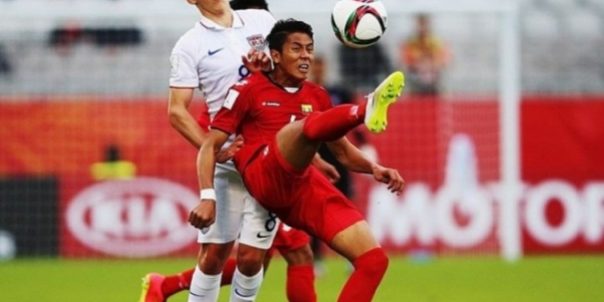 YANGON (31 May 2015) – Myanmar performed admirably on their FIFA U-20 World Cup debut but ultimately finished on the losing side as the South East Asians let slip an early lead to lose 2-1 to the USA in their Group A opener on Saturday.

The USA, appearing at the tournament for the 14th time, were punished for a sluggish start in the ninth minute when Yan Naing Oo scored Myanmar’s historic first goal only for the Americans to gain the ascendancy through Maki Tall’s 17th minute equaliser and a winner from skipper Emerson Hyndman 11 minutes into the second half.

“We can leave this arena with our heads raised,” Myanmar’s German coach Gerd Zeise told fifa.com.

“We were a little bit unlucky, especially in the first half. I didn’t see a better performance from the Americans, they only had more experience. I told [the American bench] that they were too clever for us and we must learn.”

Myanmar, who qualified for the under 20s World Cup for the first time after reaching the semi-finals of the 2014 AFC U-19 Championship on home soil, made a dream start to their tournament debut when they took the lead with just nine minutes at the Northland Events Centre played.

Yan Naing Oo wrote his name in his country’s footballing folklore by scoring Myanmar’s first ever FIFA U-20 World Cup goal when the Zayar Shwe Maya FC midfielder eventually stabbed the ball past Freiburg goalkeeper Zack Steffen after an inswinging corner had created havoc in the USA defence.

Yan Naing’s goal was not just a first for Myanmar it was also the first goal of New Zealand 2015 after the tournament hosts were held to a goalless draw by Ukraine in the competition’s curtain raiser earlier on Saturday in Auckland.

However, Myanmar’s advantage was to last just eight minutes when Lille midfielder Tall, who is on loan to Red Star in France’s second division, levelled for the USA, volleying home at the back post after Cameron Carter-Vickers had flicked on Hyndman’s corner.

The equaliser inspired the USA who dominated the remainder of the first-half and their dominance continued after the restart when Hyndman went from provider to scorer with what transpired to be the winning goal.

After shutting the door on a rare Myanmar attack, the USA pushed forward with Rubio Rubin, who has already been capped three times for the senior national team, starting the move that culminated in Fulham midfielder Hyndman slotting home the decisive goal.

Despite the victory, USA coach Tab Ramos was unimpressed with his side’s performance and complimented Myanmar on their tournament debut.

“We didn’t play how we wanted to play, that’s for sure,” said the former USA international midfielder.

“We found in front of us a very inspired team, a newcomer coming into the World Cup and they fought hard. They made us play ugly and it was difficult for us. I’m happy with the win but we’re going to have to improve if we’re going to go anywhere in this tournament.”

Myanmar are next in action on Friday when they travel to Wellington to take on hosts New Zealand while the USA will be looking for the win that will take them through to the Round of 16 when they face Ukraine in Auckland on the same day.