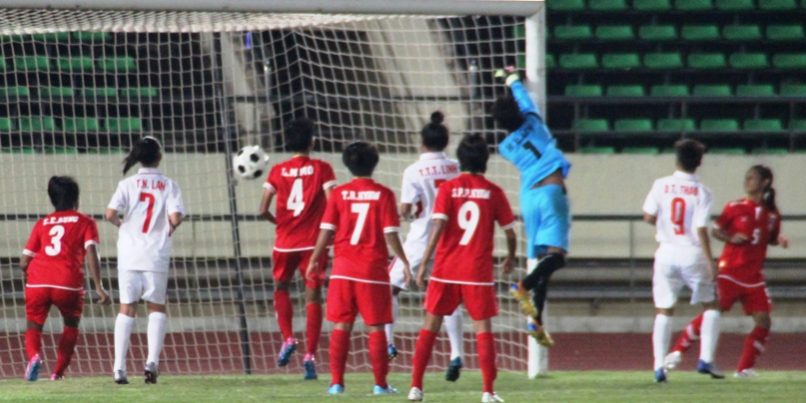 Myanmar (in all red) vs Vietnam (in all white)

VIENTIANE (12 May 2017) – It was a cracker of a match and Myanmar brightened their chance of a place in the semi-finals of the AFF Under-15 Girls’ Championship when they beat Vietnam 2-1 in the decisive game of Group A here at the KM16 National Stadium.

With both Vietnam and Myanmar having conceded defeat to group leaders Thailand previously, the pressure is on either team to win the tie so as to ensure their passage to the next round.

Vietnam, playing their second game of the competition, were a lot more determined at the start as they pushed their opponents hard. But while they managed the breakthrough, they just can’t seem to get a shot in towards the Myanmar goal.

It was not until the 25th minute that Vietnam got a foot in but Tran Thi Thu Xuan’s nice run in between her markers was followed by a wild shot that sailed over the crossbar.

But two minutes later, Vietnam finally went ahead when Thu Xuan latched on to a corner from Tran Thi Thuong.

Then came a double chance for Thu Xuan with the first crashing the woodwork while moments later, it was blocked by a recovering defender.

That failure to add to the score line allowed Myanmar to push forward and in the 32nd minute, they grabbed the equaliser when Myat Noe Khin’s seemingly harmless grounder failed to be anticipated by Vietnam keeper Dao Thi Kieu Oanh as it rolled into goal.

That goal seems to take the wind out of Vietnam as they fell struggled to find their footing into the second half.

At the hour mark, Myanmar nailed their second goal and what turned out to be the winner with substitute Su Pyae Pyae Kyaw stabbing home the corner from Noe Khin as the Vietnam defence stuttered for the clearance.

Growing in confidence, Noe Khin was presented with a double chance which she muffed as Vietnam tried in vain for the equaliser.

With the win, Myanmar have picked up six points from three matches played while Vietnam are still without a point after two games.

Malaysia (in white and blue) vs Thailand (in all black)

In the meantime, Thailand had a stroll in the first game of the afternoon when they leisurely walked past Malaysia 7-0.

To be fair, the score could have been a lot bigger had it not been for the relaxed attitude of the Thai strikers or that the Malaysian keeper Siti Noor Maslinah Asiruddin making a string of time saves.

It took the Thais a while to break down the stiff Malaysian resistance with Kotchaphon Niilaor testing the Malaysian backline with a run that beat the offside trap but only managing to find the side netting for her effort.

But the goal finally came through in the 18th minute when Thanakon Phonklam delivered the cross for the unmarked Pattaranan Aupachai to slam the ball in at the far end.

With the floodgates finally opened, Thailand went up a gear and they duly added three more goals for a 4-0 lead at the half through Trinity finishing a rebound in the 25th minute, Pluemjai Sontisawat dipping shot in the 34th minute and then a cracker from Ploychompoo Somnonk just before the break.

The Thais were not yet finished into the second half as even though the mostly diminutive Malaysians tried to push forward, they just can’t find their way through the physically superior Thai girls.

And in the end, they just had to be content with a token resistance as Thailand  added three more goals through Ploychompoo (16th minute and 64th) and substitute Janeita Jinantuya in the 72nd minute.