Get Behind the Young Lions, says Aide 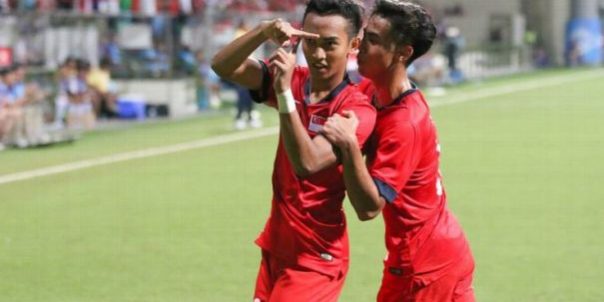 SINGAPORE (11 June 2015) – Singapore coach Aide Iskandar has come out pleading with local fans to get behind the Young Lions as they chase for a place in the semi-finals of the men’s football event.

Currently placed third in Group A behind group winners Myanmar and second-placed Indonesia, the hosts will have a chance to book their place in the next round should they be able to win their final game in the group tonight.

But standing in the way of the Young Lions and a date at the National Stadium in two days would be none other than Indonesia, who has been firing great guns over the last few matches.

“There has been a lot of negativity surrounding the team,” said Aide.

“I know that we have not been playing exceptionally well but playing at home is never easy. But the fans should be backing the team no matter what.

“I hope that the fans will continue to support the players as these are young players and they still have a great future ahead of them. You can see that they try very hard in every game to win matches.”

Singapore had begun their campaign on the best possible note with a 1-0 win over the Philippines despite missing a hatful of chances.

Against Myanmar, the situation was the same as Singapore missed sitters after sitters before conceding a 2-1 defeat off two fabulous freekicks.

In their third match of the group, Singapore needed some poor defending from Cambodia before they could score a 3-1 win – a situation that did not exactly sit well with the demanding Singapore fans.

“The more criticism they get, the harder is the pressure on these youngsters,” Aide added.

* Team in bold already in semi-finals