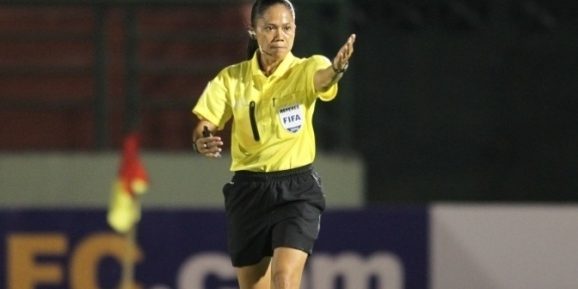 Apart from Kim and Gani (pictured), who received her accolade during the AFC Annual Awards 2014 and AFC 60th Anniversary gala in Manila, the Philippines last year, four other women referees and seven assistant referees from AFC have been listed as prospective match officials for the tournament, a FIFA media release said.

The FIFA Referees Committee, under the chairmanship of Jim Boyce (Northern Ireland), has listed 22 referees, seven support referees (one of them local), and 44 assistant referees representing 49 different countries for the FIFA Women’s World Cup 2015.

FIFA has implemented a comprehensive programme to ensure that the referees for this very important competition will be in peak condition come June 6.

Just as it did for the 24 participating teams, the road to the FIFA Women’s World Cup 2015 began for an initial group of referees and assistant referees from all over the world in September 2012, when FIFA took the important decision to create a women’s refereeing project.

One of the key objectives was match control and consequently to prepare this group of prospective referees for the FIFA Women’s World Cup 2015. The referees selected for the tournament in Canada have been chosen based especially on their personality and their quality in terms of football understanding by being able to read the game and the teams’ tactical approaches towards each match.

Between now and June 6, the selected group of match officials will participate in two seminars: one in Zurich from April 18 to 24 and the other in Vancouver ten days before the kick-off of the FIFA Women’s World Cup 2015, at which the identities of the referees and the support referees will be decided.

The selected referees and assistant referees will be observed and monitored regularly during this period, and FIFA is ready to give them all the support they need so that they can prepare for this important tournament in the best possible manner.