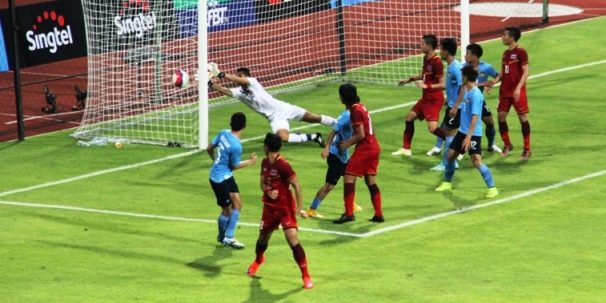 SINGAPORE (29 May 2015) – Four goals from striker Chananan Pombupha drove defending champions Thailand past Laos in the second game of Group B as they underlined their desire to defend the title they won two years ago in Myanmar.

Any thought that Thailand were not the same team they were in 2013 was thrown out of the window just as soon as the passes begun to be strung from either flank.

And by the time Thailand grabbed their first goal after just eleven minutes on the field, the game was theirs for the taking.

“Chananan was in his element tonight. He gave the team the confidence. He made the difference,” said Thai coach Choketawee Promrut after the match.

A sumptuous corner from the right was nodded home by Narubadin Weerawatnodom in the 11th minute as Chananan then nailed his first goal of the game nine minutes later when he made the cross from Nurul Sriyankem.

Nurul then put the Thais comfortable 3-0 in front in the 38th minute when he punished some hesitant Laos defending.

And just two minutes after the restart, Chananan headed home the corner from Peerapat Notechaiya.

After converting a penalty in the 61st minute to complete his hat-trick, Chananan made sure that he is the top hitman after just one day of competition with the fourth goal of the game in the 74th minute – off yet another cross with substitute Do Tristan the provider.

“We gave away some goals which we should not have,” said Booth. “We know the style of play and what to expect. But somehow when we are on the field, we just forget all that.”