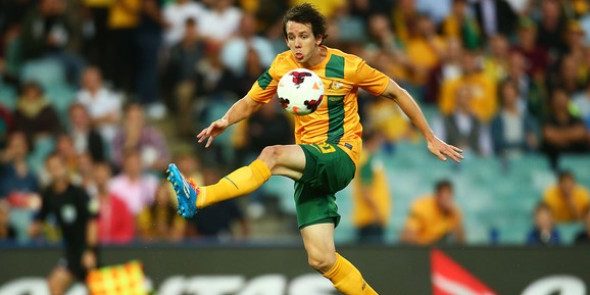 Kruse had been in fine form for Bundesliga side Bayer Leverkusen until he ruptured his anterior cruciate ligament last January, ruling him out of the rest of domestic season in Germany and, just as significantly, Australia’s FIFA World Cup campaign in Brazil.

However, the 26-year-old, who played a part in Australia’s recent friendlies against the UAE and Qatar, has declared he is now back to his old self and looking forward to facing Asia’s reigning champions on Tuesday.

“I’ve started to get a bit more game time now on the road coming back from my injury and I’m starting to feel more comfortable in myself and my knee,” Kruse told Football Federation Australia TV.

“I’m starting to feel like I’m getting back to the way I was before I did my injury. It’s been a tough road but I’m really looking forward to this next game. For me (the last two friendlies) were massive. They were my first two games from the beginning in close to a year.

“It will be a difficult test (against Japan) but obviously when we play against opposition that’s very strong we seem to step up and play decently against them.

“The last time we played them (a 1-1 draw in a World Cup qualifier in Saitama last year) we were a couple of minutes away from winning.

“Hopefully we can put in a better performance than that and try and take the game to them and see how good we can do.”

At next January’s Asian Cup in Australia, the host nation have been drawn in Group A alongside Korea Republic, Kuwait and Oman, while Japan are set to lock horns with Jordan, Iraq and Palestine in Group D.