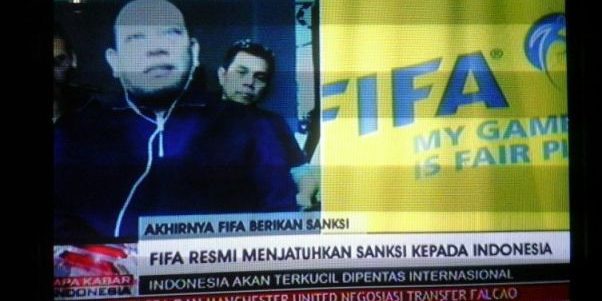 JAKARTA (30 May 2015) – FIFA on Saturday suspended Indonesia after the government in Jakarta sought to oust the country’s football association, the latest crisis to hit the sport in Indonesia.

The decision means Indonesian sides will no longer be able to take part in world football, and comes less than two weeks before the country was due to begin qualifying matches for the 2018 World Cup.

The national Under-23 team will, however, still be able to participate in the football tournament at the Southeast Asian Games, which is just getting under way.

FIFA’s decision “resulted from the effective ‘take over’ of the activities of PSSI (the Indonesian football association) by the Indonesian authorities,” a spokesman for the world governing body said.

“All Indonesian national teams (national or club) are prohibited from having international sporting contact which includes participating in FIFA and AFC competitions.”

The Asian Football Confederation (AFC) is one of six regional federations that make up FIFA, and the ban means Indonesia will no longer be able to participate in the AFC Cup, the region’s premier football tournament.

PSSI also loses its FIFA membership rights and its members and officials will not benefit from any FIFA and AFC development programmes or training, the spokesman said.

The decision was made at a meeting of the FIFA’s Executive Committee in Zurich on Saturday.

The row erupted in April when the PSSI halted the country’s top-flight league due to a disagreement with the sports ministry over the participation of two clubs.

The ministry then froze all activities of the PSSI, and said it was setting up a transitional body to replace the association.

FIFA, which takes a dim view of governments interfering in domestic associations, backed the PSSI and gave Jakarta until May 29 to allow the association to resume activities, or face a ban from world football.

A series of last-ditch efforts this week to resolve the row, including an attempt by Indonesia’s vice president Jusuf Kalla to persuade the sports ministry to back down, came to nothing.

Sports Minister Imam Nahrawi has refused to change course and in recent days expressed hope that the crisis engulfing FIFA would delay the sanction.

Top FIFA officials were arrested this week after being accused by US authorities of taking huge bribes, while Swiss police are investigating the awarding of the 2018 and 2022 World Cups.

“It doesn’t matter if we are absent from international competitions for a while as long as we can win big in the future,” he was cited as saying in the Jakarta Post newspaper on Saturday, before the suspension was announced.

“I’m confident when the reforms are made, we will be moving forward.”

The suspension is just the latest crisis for Indonesian football, which was only just recovering from a feud between the PSSI and a breakaway association, which led to the creation of two separate leagues.

FIFA also threatened to ban Indonesia over that row but the two sides eventually came back together, avoiding a sanction.