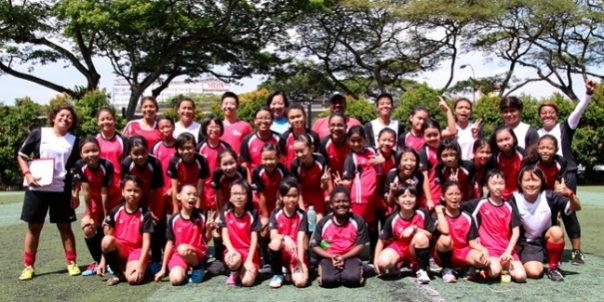 SINGAPORE (21 April 2015) – The FA of Singapore (FAS) have launched the first all-girls training centre for their Cubs Programme on the weekend.

More than 40 primary school girls turned up for the event in which Julie Teo, the General Manager of the FAS’ Grassroots and Women’s Football Department, described as “very promising”.

“This is the first time I have seen so many girls in Singapore gathering to learn to play football,” she said. “We had feared that the thunderstorm would keep them away, and I think some kids didn’t turn up because of the bad weather.

“All our other centres will be opened to both boys and girls, but we thought it would be good to also have one catering specifically to girls,” said Teo.

Queensway Secondary is one of the top schools in girls football. The school usually finishes in the top four in the ‘B’ and ‘C’ Division tournaments, and won their first ‘B’ Division title last Wednesday.

It costs $50 to sign up for the first month. The fees include insurance, and a set of football attire (jersey, shorts and socks). Subsequently, the monthly fee is $24.

The FAS will be opening their third centre at Serangoon Stadium in June. This centre will offer training on Saturdays.