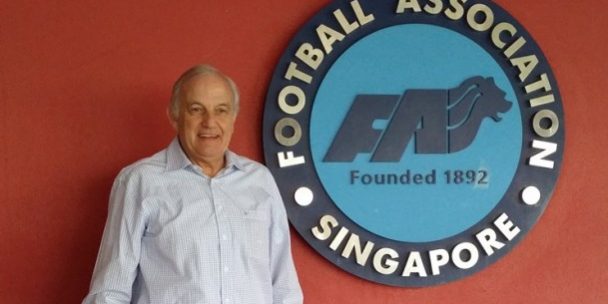 SINGAPORE (3 April 2015) – The FA of Singapore (FAS) have appointed Michel Sablon as the new Technical Director on a two-year contract.

The 67-year-old Sablon had coached several Belgian national age-group teams including the Olympic squad, and was also the assistant coach of the Belgian National ‘A’ Team which reached the semi-final of the 1986 FIFA World Cup before losing to eventual champions Argentina.

Sablon, a member of the Belgian coaching team at the 1990 and 1994 editions of the FIFA World Cup, was appointed in 1996 as the Director of the 2000 UEFA European Football Championship (also known as UEFA Euro 2000) which was co-hosted by Belgium and the Netherlands.

In his next appointment as the National Technical Director at Royal Belgian Football Federation, Sablon designed and introduced a transformative 10-year master plan which revolutionised Belgian football and produced a ‘Golden Generation’ of footballers who are now playing in top professional leagues in England, Spain and Germany, among others.

FAS President Zainudin Nordin said: “Michel is one of the most renowned and successful Technical Directors in the world today, and his vision and hard work in revamping the youth development system in Belgium have been acknowledged as a key factor in the rise and success of Belgian football in recent years.

“Michel brings with him great wealth of international experience, ability and track record in mentoring and grooming youth players and coaches, and his experience at the FIFA World Cup and other high-profile competitions will benefit our various teams preparing for their international assignments. In view of his experience in managing UEFA Euro 2000, Michel is well-positioned to spearhead our bid to host the FIFA Under-17 World Cup and oversee the long-term preparations for the competition.”

Sablon said: “It was a rigorous recruitment process and I deeply appreciate that the FAS officials were sincere and forthright throughout the process. In addition to their openness in sharing with me the key challenges and constraints, I am also impressed by their passion and determination in enhancing the quality of Singapore football. I had received a few good offers although I should add that the professionalism and sincerity of the Federation convinced me to accept this challenging position.

“Youth development is a long-term project and takes time to yield results. I will work closely with my partners and colleagues to further strengthen the current structure and system, which include key programmes such as the National Football Academy, and Junior Centres of Excellence which was launched just a few years ago. Going forward, I am confident that the quality of players who have been developed through our full youth development system will be greatly enhanced by the time they graduate from the NFA.

“Belgium and Singapore are countries with a small population size and while the challenges and constraints are, to some extent, different, I am confident in building on the success of FAS’ youth development system. In addition to the development of our youth players and coaches at both the elite and grassroots levels, I also look forward to overseeing the bid to host the FIFA Under-17 World Cup which is, in my view, a game-changer for football and sports in Singapore.”