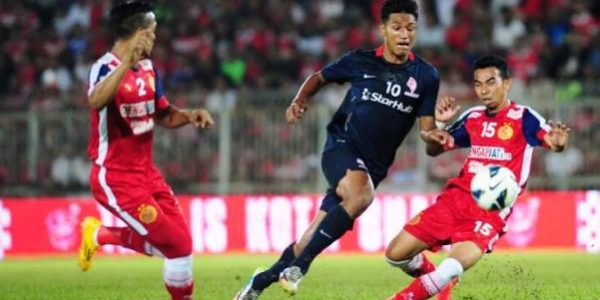 SINGAPORE (22 May 2015) – If there is one name that iFandi Ahmad will not forget easily when his Lions XII take the field in Saturday’s FA Cup final against Kelantan is national striker Norfarhan Ahmad.

The Terengganu-born Norfarhan destroyed Fandi Ahmad’s dreams of lifting the FA Cup as coach of Johor Darul Takzim in 2013 when he netted the solitary goal in Kelantan’s 1-0 win over the star-studded Southern Tigers.

Two years later Fandi crosses path yet again with the Red Warriors and Norfarhan yet again. Last year Norfarhan donned his homestate colours before returning to Kelantan again this season.

The defeat in 2013 is still fresh in Fandi’s mind and it comes with fear. Norfarhan could feature prominently in coach Azraai Khor Abdullah’s match strategies and plans as Nigerian Austin Amutu is likely to start from the bench again because of his nagging knee injury.

Amutu, however, is Kelantan’s hero in taking the Red Warriors to final when he came off the bench and scored two late goals in the 3-1 win over defending champions Pahang in the return-leg semi-final in Kota Bahru last Saturday and a place in the final on a 3-2 aggregate. Pahang won the first-leg in Kuantan by a 1-0 margin.

“Experience is Kelantan’s big asset. They have experienced players and four good foreigners. We will start as underdogs but we will give a fight and play our best,” said Fandi.

“This is my second FA Cup final, my first was destroyed by Norfarhan. He (Norfarhan) is still with Kelantan. So we have to be wary of the experienced players like Norfarhan.

“Ours is a young team and playing in front of a crowd of about 70,000 or 80,000 or even more could be a major factor. The massive crowd could be intimidating for my young players but the morale is high after we reached the final.”

Meanwhile, Azraai said the Amutu trained with the team in Kota Bahru on Thursday but “he may not last a full match” and could once again feature as a substitute.

“But it has not affected the mood of the team. The morale is high,” said Azraai.