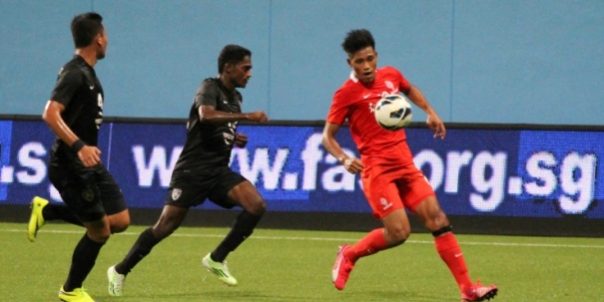 SINGAPORE (18 May 2015) – Reaching the FA Cup final is a big thing for Singapore outfit Lions XII and their much loved coach Fandi Ahmad – Singapore’s most famous professional footballer.

And the Singapore legend wants to create another piece of football history when his team plays Kelantan in the final at the Bukit Jalil National Stadium in Kuala Lumpur on Saturday (May 23).

This is the first time in the competition’s history that a team from Singapore will play in the FA Cup final but for Fandi it will be his second. Fandi was the coach of Johor Darul Takzim for the 2013 final when Kelantan beat the Southern Tigers 1-0 to retain the silverware with Farhan Mohamed scoring the winner.

Lions XII reached this year’s final through the hard way with Terengganu fans and supporters running riot after their team failed to advance despite a 3-2 win in the return-leg semi-final at the Sultan Mizan Zainal Abidin Stadium in Gong Badak, Kuala Terengganu on Saturday.

The two-leg semi-finals saw both teams tied 4-4 on aggregate but the Lions XII advanced on the away goals ruling. Lions won the first-leg at the Jalan Besar Stadium in Singapore 2-1.

It did not stop at that as Fandi and his Lions were holed up in the dressing room inside the Sultan Mizan Stadium for safety reasons before they could leave the stadium for their hotel under police escort at 3am.

Fandi also revealed that he will try to convince the Football Association of Singapore (FAS) to release three of his players from the Lions XII squad who are with the Singapore SEA Games team. The three are midfielders Christopher van Huizen and Faris Ramli and defender Shakir Hamzah.

The three returned to Singapore on Sunday and Fandi hopes to get the services of the three to beef up his team for the FA Cup final. The three missed Saturday’s the return-leg as they were with the SEA Games team for a training-cum-playing tour of Japan.

“I need my best players for the final. The excitement of reaching the FA Cup final was beyond the dreams of many…even our critics had not given us hope. But here we are and hopefully we can go all the way and win the silverware before the SEA Games football competition begins,” said Fandi.