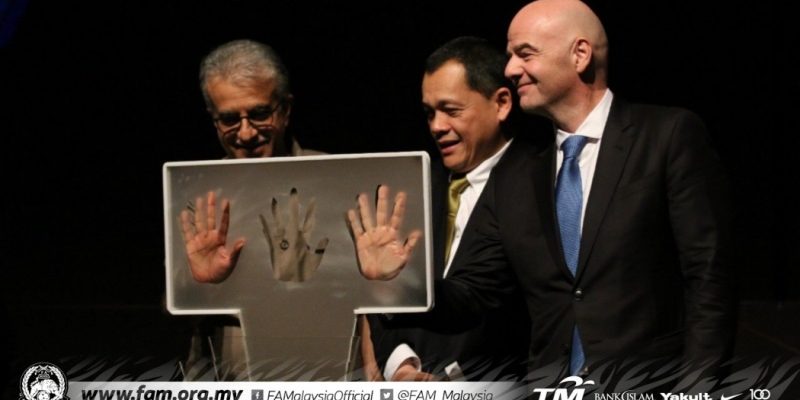 The 12-year period Roadmap is divided into three strategic plans with its first phase – from year 2019 to 2022 – to build a solid foundation from governance, competitions and human capital development as well as infrastructure, followed by the second phase (2023-2026) – to be accomplished at the Asian level, ending with the third phase (2027-2030) – aiming to produce a national team of world-class level.

“This Roadmap is a national agenda, an agenda for all of us, for me, for FAM, for the stakeholders and fans, and if we want to realize this vision, we will have to ensure the participation of all parties in reaching this common objective,” said Dato’ Haji Hamidin.

In the launch ceremony, the F:30 presentation was done by FAM General Secretary, Stuart Michael Ramalingam along with FAM Technical Director, Peter De Roo and witnessed by more than 200 members of the local football community consisting of FAM member affiliates and media practitioners.

Dato’ Haji Hamidin described F:30 as a symbol of FAM’s seriousness and will in embarking on a comprehensive development plan at every level towards making Malaysia a reputable footballing nation.

“The 12-year period is a realistic target taking into consideration the local football ecosystem at its current state.

“The core of this roadmap is to empower the affiliates from the perspective of human capital development and competition, the introduction of Malaysian football DNA through uniform coaching curriculum, and strong grassroots development.

“In this road map too, FAM intends to create a group of professional referees aimed at improving the quality of the refereeing,” he said.

Infantino, who is in Kuala Lumpur for the first time as FIFA President, congratulated FAM on the launch of the F:30.

“Congratulations to the FAM and to its President Dato’ Hamidin for launching FAM’s roadmap just three months after his election. FIFA always supports and welcomes affiliates who demonstrate the passion of developing football at every level.

Shaikh Salman on the other hand considers F:30 as a basic framework capable of building an ecosystem that promotes the growth of Malaysian football.

“On behalf of AFC, we hope that Malaysia reaps the rewards of this wonderful initiative,” he added.