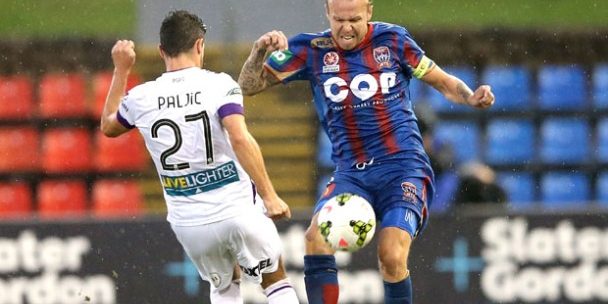 SYDNEY (30 Jan 2016) – Taylor Regan had quite an introduction to Malaysian football, attending the final of the 2015 Malaysia Cup in December as more than 70,000 fans crammed into the Shah Alam Stadium.

Double that number of tickets could have been sold and the Australian was sold on this passionate football country after signing for Negeri Sembilan.

“I got tickets for the final from Rob Cornthwaite,” said the defender who left Newcastle Jets in 2015.

“I have never experienced anything like it in Australia. The fans here are fantastic and if you end up in a good city, it is great.

“This is a great way into South-east Asia and Asian football.”

Taylor Regan is one of a growing number of Australian football players who are currently calling Malaysia home.

In the Malaysia Super League, the top tier, there is Cornthwaite at Selangor, Brent Griffiths at Penang, Jonathan McKain with Kelantan and Ndumba Makeche replacing Ryan Griffiths at Sarawak.

Drop down a division and there are four ex-Hyundai A-League stars with Negeri Sembilan – one hour’s drive south of the capital Kuala Lumpur – in the country’s second tier the Malaysia Premier League.

As well as Regan, there is Alex Smith, Joel Chianese and Andrew Nabbout.

“It is good to have the boys here and we are getting along well and we are looking forward to the challenge ahead in the coming season.”

“I have known Gary for a while. I was coming off a contract and asked Gary if he knew of anything going in Asia and now here I am in Malaysia.”

For Regan, a Hunter Valley native, it is not hard to understand why Malaysian clubs like Australians.

Back in the nineties, Scott Ollerenshaw scored a goal a game for Sabah (prompting the memorable nickname “The Ginger Maradona”) and is considered one of the greatest Aussie imports.

Since then, the likes of Sasa Ognenovski, Alex Brosque, Matt McKay, Tim Cahill and Ryan Griffiths and others have built on that Australian reputation around Asia and increasingly those countries to the north are actively searching for players from down under.

“I think the mentality is a big reason,” said Regan.

“The footballers here are technically good even if the national team is going through a tough time. I think they like the Australian attitude and are looking to us as leaders.”

Regan seems to be seen that way as he is already captain of the second tier club that was relegated from the Malaysia Super League in 2013.

“It is a privilege. Being at the back makes it easier and we have quite a young squad. The club has a rich history and is one of the bigger clubs in the past.”

The passion is there but there are other aspect that the Australians can help with.

“We have to keep them together and keep them strong and we can win some games. That is what it is all about wherever you go.”

All know what is required in the 2016 season that starts in February. “Promotion is the target. We are in the Premier League and need to be back in the Super League.

“The fans want it, the president wants it, we all want it.”