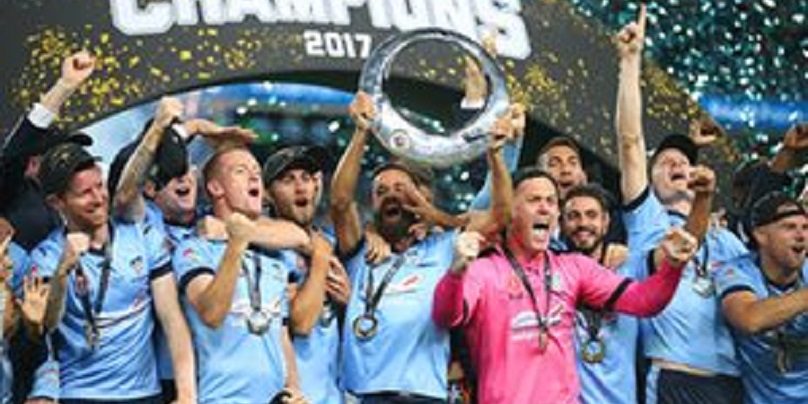 SYNDEY (7 May 2017) – Sydney FC have crowned an extraordinary season by defeating arch-rivals Melbourne Victory on penalties 4-2 in a titanic Hyundai A-League Grand Final at Allianz Stadium on Sunday. The game ended 1-1 after extra time. In the shootout, Brosque opened the scoring, Troisi replied to kick off the shooout.

Wilkinson then missed to give Victory the advantage, and Broxham made it 2-1. Carney coolly made it 2-2 and Valeri smashed his shot against the bar to hand Sydney a lifeline. O’Neill scored to make it 3-2 with Rojas to take for the Big V. Vukovic saved brilliantly. And the player of the season Milos Ninkovic stepped up to score the winner 4-2.

After confirming the Premiership with weeks left in the regular season, Graham Arnold’s Sky Blues have now done the double to cement their position as the A-League’s most dominant club side – and one of the greatest in league history. Sunday’s finale in the Harbour City wasn’t one of the great grand finals but it was certainly the most intense.

It was a frantic and electrically charged first half as both sides threw themselves into the contest in front of 41,546 fans. It was fierce, feisty and intense football with referee Jarred Gillett having his hands full. Amid the scrappy play, one moment of pure class broke the game open when Berisha pounced to give Victory the lead on 20 minutes.

Sydney FC, as expected threw everything at their opponent in the second half with David Carney thrown on early, but Victory kept their shape and excellent defensive discipline. That was till the Sky Blues’ pressure finally paid off and Rhyan Grant as popped up in the box to tap in the equaliser. Suddenly, and for the first time, Victory were looking shaky as the Sky Blues sensed it was their time. But in a game of few clear chances, neither side could find a winner and the game went to extra time.

Clearly both sides looked fatigued in the final stages of the finale after an epic 90 minutes. Troisi could’ve won it for the Big V but it wasn’t to be and so to penalties it went.