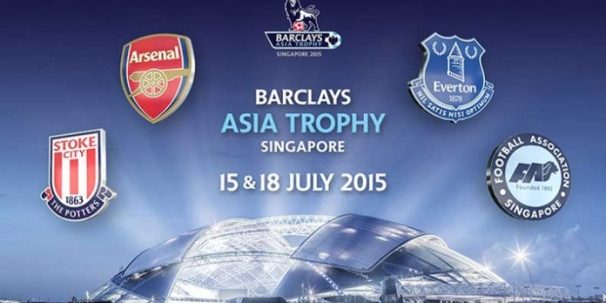 SINGAPORE (10 July 2015) – The English Premier League is to host a knowledge transfer workshop for the cream of Asian football executives on 16 July in Singapore.

As part of the off-field programme of the Barclays Asia Trophy 2015, the all-day event will see the Premier League and its clubs share their expertise in the areas of communications, sales and marketing, and community development.

The workshop and networking event is being delivered as part of the Mutual Cooperation Agreement that the Premier League and the Asian Football Confederation (AFC) signed in March 2014, when the two organisations agreed to work closely to achieve mutual objectives.

Premier League Executive Chairman Richard Scudamore, who has helped develop the Premier League into the world’s most watched and supported football league, will open the workshop. There will be three hour-long sessions at which there will be a Premier League speaker and a speaker from each one of the three BAT participating Premier League clubs (Arsenal, Everton and Stoke City) – half the time will be devoted to a question-and-answer session for the delegates.

The Barclays Asia Trophy 2015 offers the opportunity to use Singapore as a regional hub for a series of workshops for AFC central staff, heads of national leagues, football associations from across Asia and senior executives from the AFC Champions League clubs, including those from the last two winners, Western Sydney Wanderers and Guangzhou Evergrande.

The workshops will also be attended by representatives from the Football Association of Singapore, the Singaporean S.League – including CEO Lim Chin – seven of its clubs and SportSG.  In total, in addition to AFC executives and staff, there are representatives from 17 AFC countries: Australia, China, Hong Kong, India, Iran, Japan, Jordan, Kuwait, Lebanon, Malaysia, Myanmar, Qatar, Saudi Arabia, Singapore, Thailand, Uzbekistan and Vietnam.

Asian Football Confederation President Shaikh Salman bin Ebrahim Al Khalifa said: “I am happy to note the numerous activities undertaken by the Premier League in partnership with the AFC and its Member Associations to develop various facets of football in our continent.

“I am confident that the ‘Premier League/AFC workshop’ will greatly benefit AFC Champions League clubs, will provide them with the opportunity to learn from the experiences of senior Premier League executives, and provide an ideal platform for sharing of expertise and knowledge.”

Premier League Executive Chairman Richard Scudamore added: “The Premier League and its clubs are enormously active in helping develop football around the world. From our Premier Skills initiative, that is working in 25 countries and has trained over 6,300 grassroots coaches and referees, through to hosting visits for senior executives from the likes of the Indian and Chinese Super Leagues and their clubs.

“Delivering workshops at events such as the Barclays Asia Trophy is a major way in which we act upon our Mutual Cooperation Agreement with the Asian Football Confederation. We look forward to making a positive contribution with our counterparts from across the AFC whilst we are in Singapore, and working together on a lasting legacy in the region.”

The workshop had been developed to reflect the current strategic focus of the AFC, which is to make football more competitive across Asia and build fan engagement over the next two years, as well as enabling the Member Associations to develop and professionalise their league and clubs in several aspects.

Among the topics of discussion from the speakers will be: optimising communication channels/platforms for fan engagement; the importance to strategic media partnerships; explanation of the Premier League commercial model; sponsorship activation and merchandising; the benefits of CSR investment; and the importance of connecting with communities.