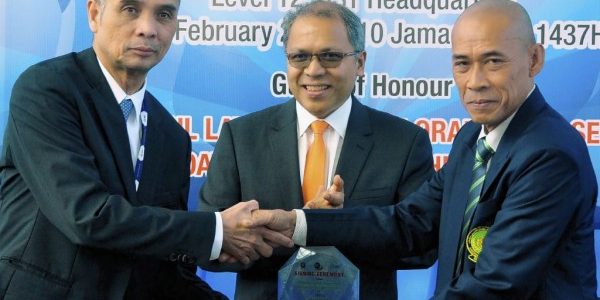 NFABD has confirmed that 10 teams will be pushing for top honours in the DST Super League – though the number of teams competing in the second-tier DST Premier League is yet to be finalised.

“We are happy to share our plans with NFABD to provide support through DST’s own annual initiative “Ihsan Kasih” for orphans and under-privileged children,” Radin Sufri said.

“These youngsters are held back in achieving their true potential, so we hope through this program – which starts in April – they will be groomed to play in the leagues and ultimately for the national team.

“In last year’s program, NFABD successfully identified 10 young orphans who are currently in the Under-12 and Under-14 grassroots scheme. Our goal this year is to achieve the same feat or better.

“We would like to express our deep appreciation to DST for their generous sponsorship as well as the continuous and relentless support in promoting football in the country,” said Hj Madli Mohd Yusuf, Acting Deputy President of NFABD in his opening remarks.

“Having DST by our side gives us motivation to improve the quality of the sport,” added Hj Madli in his speech.