DPMM Just one game Away from S-League 2015 Title 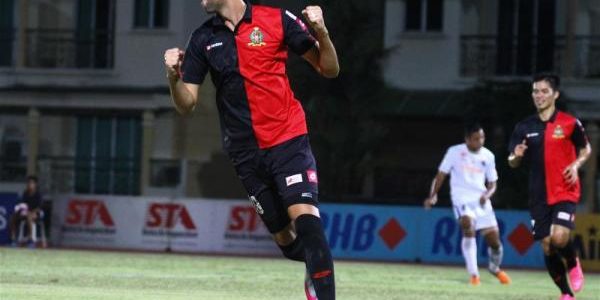 SINGAPORE (10 Nov 2015) – Brunei DPMM have one hand on the Great Eastern-Yeo’s S.League trophy after dispatching Warriors FC 3-1 at the Choa Chu Kang Stadium.

Their victory meant that second and third-placed Balestier Khalsa and Albirex Niigata (S) are out of the running for the title, although fourth-placed Tampines Rovers still stand a mathematical chance of catching the Bruneians.

DPMM will still need to win their final game of the season against the Tigers to wrap up the title, although they can do so earlier should Tampines fail to win any of their games in hands.

The Wasps got off to the best possible start in the match, taking the lead just after eight minutes through Paulo Sergio.

Warriors goalkeeper Daniel Ong made a mess of his clearance and sent it straight to Sergio, who made no mistake by slotting it into the net.

The lead was doubled 13 minutes later, through another mistake from the hosts.

Emmeric Ong lost the ball to Azwan Ali deep inside Warriors half, and the latter got the ball to Sergio, who sent Rafael Ramazotti through to fire home his 20th league goal of the season.

Warriors could have pulled one back in the 31st minute, but Miroslav Pejic’s deflected effort landed inches wide of the goal instead.

It was almost 3-0 before half-time when Azwan’s shot was palmed out by Daniel Ong towards the onrushing Maududi Hilmi, but the midfielder smashed it over instead.

DPMM then hit the post two minutes after the restart through Azwan, after Warriors failed to clear a Sergio low cross.

Daniel Ong was called into action once more three minutes later, this time catching Joseph Gamble’s shot from just outside the box, but there was nothing he could do to prevent a third goal in the 58th minute.

Surrounded by players inside the box. the goalkeeper was powerless against Raspudic’s bullet header after he got onto the end of Azwan’s corner.

Both Maududi and Ramazotti wasted excellent chances midway through the second half, as DPMM continued to rip apart the Warriors’ backline.

The hosts pulled a goal back with 10 minutes left on the clock when Brian McLean diverted Thomas Beattie’s cross past the hapless Wardun Yussof.

But any hopes of a comeback proved a task too tough, as they struggled to break down the solid DPMM defence before referee Muhd Taqi blew the full-time whistle.