DPMM Fall to Harimau Muda B 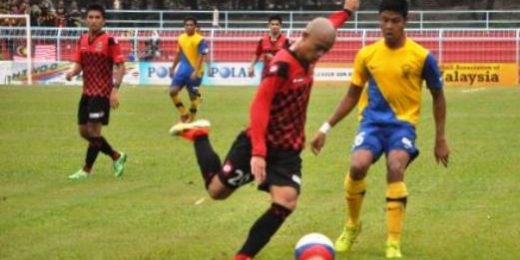 SINGAPORE (2 May 2013) – Brunei’s only professional club DPMM FC fell to their third defeat of the season in the S-League – this time going down 2-1 to the Malaysian Under-21 side of Harimau Muda B.

Following the deadlock in the first half, striker Muhammad Faizat Ghazali found the back of the net in the 47th minute before 19-year-old Maxsius Musa nailed the second goal of the game in the 80th minute.

Brazilian defender Tales dos Santos pulled a goal back five minutes to the end but it was scant consolation for Vjeran Simunic’s men.

“We have some chances to end with a draw but the game started unluckily for us as our best striker had to be replaced and when you give Harimau a goal, it is hard to come back as they are a fantastic team,” said Vjeran.

“In the second half we went a goal down and we put Dos Santos forward and we created some chances and we could have gained a point if we had not conceded a stupid second goal, which was our mistake.

“It was not easy to play with two goals down but I am happy that we finished the game with a high level of fight.”

With the win, Harimau Muda B moved up to sixth in the S-League – just a point behind DPMM.

“This is three important points for us after two straight two defeats and credit goes to my players for playing their best throughout the whole 90 minutes and they deserved to win,” said Harimau Muda B coach Razip Ismail afterwards.

“The journey is still far away and even though we are in sixth position now, it still a long way to go and teams below us will play their game soon and the table might change every round.”