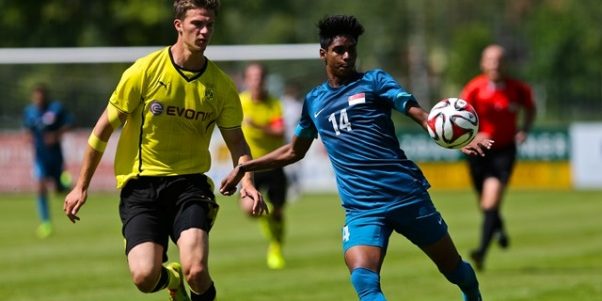 SINGAPORE (18 July 2014) – Singapore’s Under-23 team or the Young Lions were hit with five goals by the Borussia Dortmund U23 team in their second friendly in Austria as they conceded their second loss in as many matches.

Earlier, the Young Lions were pummelled 6-1 by FC Pribram in their first friendly.

And this time round, the physically superior Dotmund side showed their prowess early in the 17th minute off a solo effort from Ufuk Ozbek before doubling the advantage just before the half through Kaled Narey.

Singapore’s Rudy Khairullah’s goal was prised open once again with a rifling shot from David Solga just after the restart as Patrick Frenke then nailed goal No. 4 right at the hour mark.

Dortmund then wrapped things up with the fifth goal of the off Jan Reeviert’s header right at the end.

“The team competed well but there was a very obvious difference in physicality between the two teams. The Dortmund team was not only physical but also played a very explosive game of football,” offered Singapore U23 coach Aide Iskandar after the match.

“We had our chances to score but did not convert which was the difference between the two sides. As compared to the first game against FC Pribram, we performed so much better and they did well.”