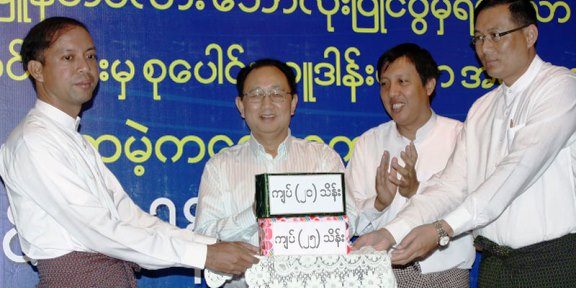 For this donation drive, MNL clubs owners contributed their gate income from the recent MFF Community Cup 2013 competition. At the ceremony, the president of the MFF, Zaw Zaw and officials, club owners and officials, representatives of four orphanages and journalists were in attendance.

At the same too the Ayeyarwady Foundation, founded by Zaw Zaw, donated an additional 2.5 million Kyat (USD 21,500) to each orphanage at the ceremony for a further total of USD 86,000.

“We are country which is passionate about football. And while we look to improve professional football in the country and also the national team, we have to also make sure that we meet our social responsibilities. I’m very delighted with this donation drive and I hope that we can continue to it every year with the MFF Community Cup Competition,” added Zaw Zaw.

MFF Community Cup is the season-opening match between the MNL Champion and the MFF Knock out Cup Champion that was introduced last year.