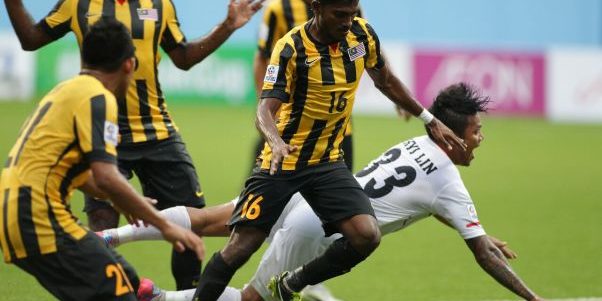 SINGAPORE (24 Nov 2014) – Malaysian coach Dollah Salleh saw his game plan blow up for the third time in succession after Gary Steven Robat was red-carded in the 0-0 draw against Myanmar last night.

“We had two red cards in the two previous matches and now a third, but today I was proud of the boys with the way they played,” said Dollah. “I would have liked three points but I’m happy anyway.”

Dollah’s hopes of collectng maximum points became difficult after Gary was sent off in the 35th minute. He picked his first booking in the 13th minute and was sent off after a strong tackle on Kyin Lwin.

Prior to the gloom of being a man down, the Malaysians started well and almost went ahead in the first minutes but Amri Yahyah’s goal was ruled offside.

From then on it was Myanmar who took charge of the game. Kyi Lwin, Ko Ko and David Htan were constantly causing havoc in the Malaysian half. And the person who stopped many of their chances was goalkeeper, Khairul Fahmi Che Mat.

The keeper stopped close range shots on a number of ocassions to the horror of Myanmar coach Raddy Avramovic. “I was a bit disappointed with the misses. The boys should be more cool around the box.”

Avramovic had said it before the game and repeated it again that the game would be tough. When asked if the game became any easier after Gary was sent-off, Avramovic had this to day. “Many of the Malaysian players played in 2009 and 2010 and have the experience, they did not for get forget how to play,” he said.

He explained that his team could have easily lost despite playing with an extra man. “With a man down, the players started moving up which opened us to counter attacks. The Malaysians could have easily killed us.”

On his next match against his former team, Avramovic said it would be a challnege. “It will be tough for us against all the teams here.”

Dollah meanwhile says that he will bring in Safiq Rahim to replace Gary. Safiq started on the bench but came on in the 70th minute for Azzammudin Mohd Akil. His presence clearly added a bit more sting to the attack but not enough to produce a goal.