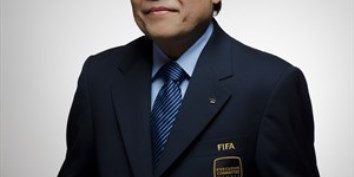 PETALING JAYA (25 Feb 2013) – Dato’ Worawi Makudi from Thailand has received the unanimous support from all 11 Member Associations of the ASEAN Football Federation (AFF) to contest for the Presidency of the Asian Football Confederation (AFC).

The Football Federation of Australia, present at today’s meeting, has also confirmed their support for Dato’ Worawi’s bid.

The AFF announced their decision to support Dato Worawi’s candidacy after a Special Meeting of the AFF Council convened here today. The special meeting was chaired by HRH Sultan Haji Ahmad Shah, President of the AFF.

“Today, we examined our unity and solidarity and have decided to be united in choosing a leader for Asia,” Sultan Ahmad declared. “I am sure Dato’ Worawi Makudi will do everything he can to further the needs of the AFC and their Member Associations.”

Dato Worawi, a long-serving official in the FA of Thailand, AFF, AFC and FIFA, commands the respect of Member Associations, not just in the Asean region but throughout the Asian continent for all his efforts to promote and develop football over the years. Dato Worawi has also contributed immensely to world football through his role as the FIFA Executive Member.

The election for the AFC president is to be held at an Extraordinary Congress on 2 May after the post was vacated by Mohamad bin Hammam. The closing date for nominations is 2 March.

The AFF Council today also pledged their unanimous support for Ms. Moya Dodd from Australia, who is the incumbent for the position of AFC Female Vice-President. She will be contesting for the female Executive Committee Member at FIFA.

“I am extremely honoured to be proposed and nominated by the ASEAN football family to contest for the presidency of the Asian Football Confederation. I will do my upmost to serve the ASEAN family Members,” commented Dato’ Worawi after the meeting.

“My main target as the AFC President would be to bring everybody together and to unite the Asian Football Confederation,” added Dato’ Worawi.