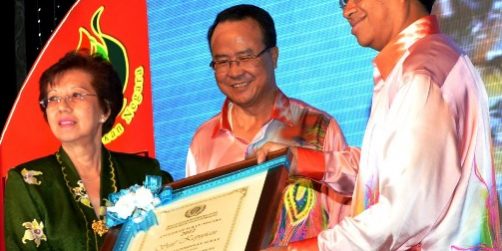 Also in attendance were Dato Sri Shabery Cheek, the Malaysian Minister for Youth and Sports and Datuk Zolkples Embong, the director general of the NSC. To receive the award on behalf of Dato Sri Paul was Datin Sri Christine Lim.

With Dato Sri Paul set to retire from football and also from his position as the general secretary of the ASEAN Football Federation (AFF) this year, the regional body had earlier in the month decided to confer him with the honour of being the Honorary Life General Secretary position.

Dato Sri Paul was born in Kuala Ketil, Kedah where he received his early education at the St.Theresa’s Primary School before moving on to Ibrahim Secondary School and then at the University Pertanian Malaysia.

Other than having played football for the state of Kedah, Dato Sri Paul also has a Diploma in Football Coaching from the FA of England.

Dato Sri Paul served the FA of Malaysia (FAM) for 18 years before moving on to take up position as the FIFA Development Officer, the AFC General Secretary, and then as the General Secretary of the AFF.

He has been appointed as FIFA General Coordinator for FIFA World Cup since the 1994 edition in the United States.

In 2008, Dato Sri Paul was awarded with the Lifetime Achievement Award at the NSC National Football Awards.