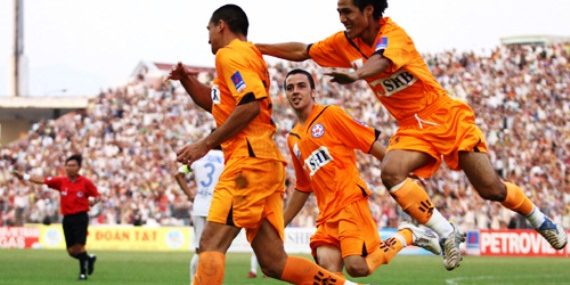 DA NANG (25 Feb 2013) – Defending V-League champions SHB Da Nang did not have to struggle too much to pummel Xuan Thanh Saigon 4-0 to win the Super Cup – their first silverware of the new 2013 season.

In the match that was played at the Chi Lang Stadium, more than 10,000 fans came to watch Da Nang obliterate their opponents with the first goal early in the second minute through Huynh Quoc Anh from inside the box.

With the score at just 1-0 to Da Nang at the break, the home team went on to find the back off Gaston Merlo in the 67th minute before Quoc Anh nailed his second of the tie just three minutes later.

Danny David of Tanzania then rounded off a fine evening for Da Nang with the fourth goal late in the game.

The team which is coached by Vietnam’s former international striker Le Huynh Duc was awarded with VND200 million (USD 9,600) for their effort as club chairman Do Quang Hien then announced an added incentive of VND1.3 billion (USD 62,500).