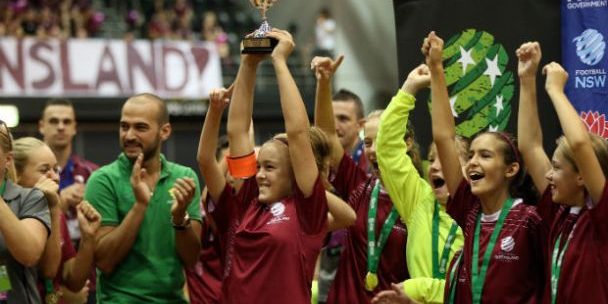 SYDNEY (10 Jan 2016) – It was yet another exciting installment of end to end action across eleven age groups as the 2016 FFA National Futsal Championships came to a close on finals day at the Sydney Olympic Park Sports Centre on Friday.

The week long tournament, hailed as one of the best in Australian Futsal history, had everything from last second goals to penalty shootouts, to a famous Championship win by tiny Pacific Island nation the Solomon Islands in the 12 Boys category.

State team representatives from South Australia, Queensland, Victoria, ACT and NSW all locked horns throughout the day which also included what was a gripping and thrilling AWD final.

While finally the 2016 Powerchair Championship was also on show as the Brisbane Roar powered through with a memorable 8-0 victory over the Central Coast Mariners.

Solomon Islands proved to be the story of the day as the tiny Pacific Island nation defeated the NSW Metro Thunder side 3-1 in what brought the entire house down in what was a crowded Sydney Olympic Park Sports Centre.

There were amazing scenes which followed soon after the Solomons victory as Coach Frax Ramofafia saw his youthful side prove too strong for their NSW Metro Thunder opponents.

Richard Sale was the star of the show scoring a double that gave the Solomons a handy 2-0 lead.

Raynolds Boboria picked up where Sale left off adding a third while Peter Grozos added what was a consolation goal for the Blues as the Solomon Islands celebrated a monumental 3-1 victory.

In the day’s first Futsal Nationals Championships it was a heroic Queensland Metro side that proved too strong for NSW Metro Thunder, as they took out the plaudits with a 4-2 victory.

Things got off to a great start for Paul Owen’s side as Tivi Williams opened the scoring with a well taken goal in the 4th minute.

Jamilla Rankin then put Queensland two up six minutes later sending the parochial Queensland supporters into raptures as they continued to dominate the match.

Mica Robinson then added a third and it seemed like there was no coming back for the Thunder in the 16thminute as the match began to fall away from the hosts.

Queensland as Rankin added her second for the match stretching the lead to 4-1.

There was still time for one last goal as the NSW Metro Thunder bagged a consolation in the 34th minute via Gemma Morgan but it was to be too little too late as Queensland Metro were crowned 2016 FFA National Futsal Champions in the U12 Girls category.

It took Victoria Magic until the final 10 minutes of the match to break down a plucky Queensland Metro 5-2.

Nicholas Kyranakis opened the scoring for the Magic before Harry Arnison equalised for Metro. Jack Beardsley then overturned the score for the maroons, scoring from the spot to make it 2-1 going into break.

It took less than five minutes for the Victorians to level the scores again, this time through Giovanni Stellitano. Caleb Phillips in the Magic goal was fantastic and made some crucial saves to keep the Metro at bay.

From then on there was only one team on the pitch. Nicholas Theodosiou scored the pick of the bunch with a delicate lob before Stellitano grabbed his second and Dennis Menelaou put the result beyond doubt with less that two minutes remaining.

NSW Metro Thunder showed great resilience and heart to come from 4-1 down against Queensland Metro to equalise, force extra time and take the victory in a penalty shoot-out.

Josh Dearn opened the scoring for Queensland but Daniel Goni equalised only minutes later for the Thunder. Queensland were soon back in the lead though as Byron Mcleod scored to take them into the break 2-1 up.

Thomas Whittaker and Leum Walpole scored inside the first 10 minutes of the second half to have the maroons cruising at 4-1.

First Ashton Ahluwalia reduced the score to 4-2 before Goni scored his second to make for an interesting final five minutes. The comeback was complete when Lucas Rainbird smashed the ball in with less than two minutes remaining to send the match to extra-time.

Neither side could get the elusive fifth goal to so that match moved to a penalty shoot-out.

Goal scorer Mcleod missed his spot kick for Queensland before keeper Bailey Togiavalu rifled the ball into the back of the net for the decisive to crown the Thunder Champions.

It was an all NSW affair in the U14 Girls category as the Thunder came away with the chocolates with a 3-1 victory in what was a great free flowing game of futsal.

Emily Bastow kicked off the proceedings with an early goal in the first minute that all but stunned the Lightning team.

Six minutes later and it was 3-0 to the Thunder as things went from bad to worse for their opponents.

Madeleine Kowalenko was the hero this time putting herself on the scoreboard.

The game then fizzled for the rest of the match however Isabella Di Sipio did pull up a consolation goal in the dying stages of the match which saw the game end 3-1 to the Thunder.

In an end-to-end, fiery game of futsal, South Australia came out on top of the NSW Metro Lightning, 4-3.

Both teams exchanged goals early on, with the South Australian’s taking the lead through Matheus Borge before the Lightning levelled almost immediately. NSW was next to take the lead with the resumption of the second half through Ryan Tran before Jozef Kogoj found the equaliser a minute later.

Lachlan Gow then put the South Australians back into the lead with a thunderous free-kick as Louis Nye made it 4-2 shortly after.

The Lightning threw all they had forward but in the end could only manage what proved to be a consolation goal through Marcus Bimbilovski, 4-3.

An odd goal was enough for the NSW Thunder Metro to sneak past South Australia in an entertaining match.

A quiet, somewhat nervous first half saw both teams happy to sit back and try to keep the ball.

The one and only goal fell mid-way through the second half as a Georgia Koutzoumis short squirmed under the keeper and over the line.

South Australia pushed all they could in the final minutes to force extra time but just couldn’t find the back of the net. Sophie Magus was forced to work hard in the Thunder goal, making some crucial saves to see her team hold out till the final whistle.

It was one way traffic in this one with the NSW Metro Thunder defeating Queensland Metro 6-2 in a comfortable victory.

The Thunder started the brighter, as Metro couldn’t cope with the early high tempo. With that came the opening goal of the game through Hayden Macerola as he found the back of the net. Less than a minute later though, Duncan Stewart had Queensland on level terms, forcing the ball into the goal.

Michael Borg then showed some fine skill to dribble past two players and set up Macerola for his second. Borg was at it again a minute later, taking on his defender and then expertly chipping the ball over the keeper for a 3-1 lead.

After the break, who else but Borg at the centre of another Thunder goal to make it 4-1. A delightful ball across goal from the number eight found Macerola who completed his hat-trick with a neat finish.

Ben Button then picked up a goal for Queensland as they reduced the deficit with just over five minutes remaining.

With just over two minutes left though, Mitchell Whalley put the result beyond doubt, capping off a fantastic move to place the ball into the back of the net.

With Metro throwing everything they had forward in search of a goal, Macerola capitalised, picking up his fourth and the Thunders sixth for a comfortable win.

A fantastic battle between two great teams took place with Queensland Metro prevailing by the odd goal in extra-time against NSW Metro Thunder.

Joshua Long, who was one of the best on the court, found the back of the net with a great free-kick to clinch the title.

In an intense match, the NSW Metro Lightning defeated the NSW Metro Thunder in a penalty shoot-out, after scored were locked at 1-1 after full-time and extra-time.

It was a tight beginning to the match with neither team able to assert their authority the way they would’ve wanted.

As the half moved on though, the Thunder began improving and with six minutes to go in the first half, Natalie Penman found the back of the net to give her side the lead.

With the first half out of the way, the Metro team came out in the second firing and found the equaliser early on as Cassidy Chidgey did very well down the left to create just enough space to toe poke the ball into the top of the net.

With scores locked at 1-1, the game moved into extra-time where again neither side could find the elusive goal to put them in front.

The Lightning held firm in the shoot-out, with all their scorers converting while keeper Dana Buttigieg had her spot kick saved.

An enticing match saw the NSW Metro Thunder overcome the ACT Boomerangs 3-1 to claim the Championship.

With opportunities at both ends, the keepers were kept quite busy with neither side able to break them down and find the all important goal as the teams moved into the break locked at 0-0.

With the second half underway, Kaan Kilinc latched onto a shot from a team-mate to bundle the ball home inside the first five minutes of the second stanza.

The wheels threatened to fall off for the Boomerangs as only minutes later the Thunder made it two, this time from a powerful shot from the right by Matthew Mazevski that found the back of the net.

The Boomerangs recovered to begin their assault on the Thunder goal, sending their keeper up to join the attack. The Thunder dealt well with the ACT side’s attacks and repelled them well until Nicholas Rathjen halved the deficit with a tap in, only three minutes before the end.

It was much of the same from the Boomerangs after that, with the whole team out in attack it left them vulnerable at the back, something Mazevski took to his advantage to score from within his own half for his second and a 3-1 lead and what proved to be the victory.