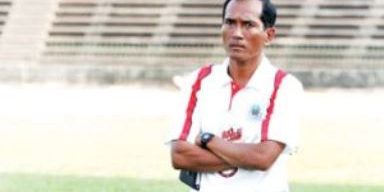 PHNOM PENH (21 March 2013) – After picking up the free three points and also three goals to boot, Cambodia will be approaching their opening game in Group E of the AFC Challenge Cup qualifiers against Turkmenistan tomorrow with some caution.

Chief coach Prak Sovannara (pix)admitted that while the key to the next round will be their match against the Philippines, they will have to be cautious when they take on Turkmenistan in the opener.

“In a format like this, not only is every game important, but every goal scored or prevented will be crucial,” said Sovannara.

“We all know how strong Turkmenistan is. We can feel some comfort from the fact that we drew goalless at home against the Philippines last year. We need to at least hold that form or go one better.”

Following the withdrawal of Brunei from the meet, all three teams – Cambodia, Turkmenistan and the Philippines – were awarded with automatic three points and three goals each.

All matches in Group E of the qualifiers will be played at the Rizal Memorial Stadium in Manila.