Courts Young Lions Still Without A Win After Seven Matches 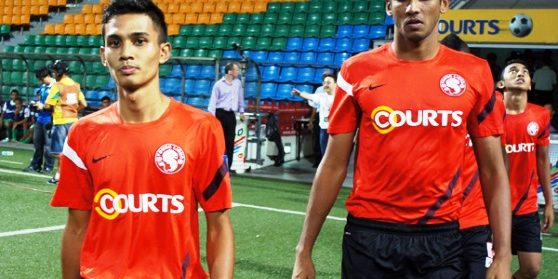 SINGAPORE (14 April 2013) – After being docked points at the start of the season, Courts Young Lions continue to struggle in the S-League when they slumped to the seventh ‘defeat’ of the season this weekend.

Eager to put their season back on track, Courts Young Lions did not have the best of start when they fell behind to an early ninth minute strike from Malaysia’s Harimau Muda B defender Ridzuan Abdunloh Pula.

But Courts Young Lions did not lose their shape and their tenacity at the Pasir Gudang Stadium paid off in the 24th minute when Fareez Farhan nailed the equaliser.

However in their eagerness to pick up their first three points of the season, Courts Young Lions had to play with a man short when Sheikh Abdul Hadi after picking up his first yellow card in the 49th minute, was given a second in the 62nd minute.

Three minutes later, Courts Young Lions were down to nine men when Al-Qaasimy Rahman was red-carded.

This gave just the right motivation for the Malaysian Under-19 lads to push forward and make their numerical advantage counts. And in the 73rd minute, Muhamad Akhir Bahari duly delivered the winner.

As Courts Young Lions stayed at the bottom of the 12-team S-League, the young Harimau Muda B squad moved up to eighth.