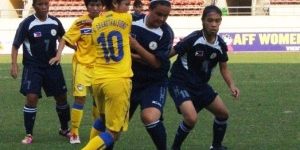 HANOI (16 Feb 2011) – Vietnam mercurial striker Le Cong Vinh has made a complete recovery from his knee injury and where he will see action for his Hanoi T&T team later this week.

Cong Vinh, who was instrumental in Vietnam’s winning run at the AFF Suzuki Cup two years ago, has been sidelined for the last ten months.

He sustained the injury last April and had gone to Portugal for an operation but he couldn’t recover in time to join the Vietnam team for the AFF Suzuki Cup 2010.

His first game for Hanoi T&T will be against SHB Da Nang at Hang Day Stadium on 18 February 2011.

“I don’t feel the pain anymore and can practice . I’m looking forward to playing football again but I don’t know how well can I perform. I need some time to regain my feel of the ball and I hope to contribute a lot to my club,” Vinh said.

“Cong Vinh is a good player and I’m very glad to see his return. We will help him regain his best shape,” coach Phan Thanh Hung said.

Hanoi T&T are currently at the top of the V-League table after winning their first two matches.