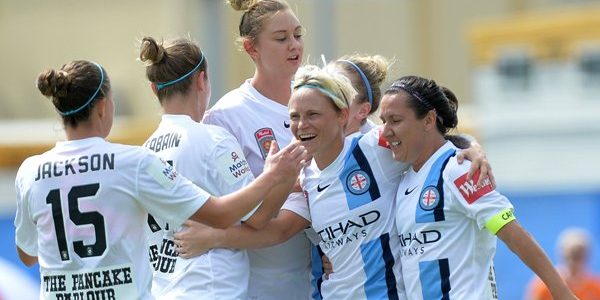 MELBOURNE (29 Dec 2015) – Melbourne City have clinched a record-breaking Westfield W-League Premiership after a hard-fought 1-0 win over Brisbane Roar at Broadbeach on the Gold Coast.

The win means Joe Montemurro’s side, who are 11 points clear of Canberra United in second, take out the title with three games remaining in the regular season.

City’s dominance this season was again on show today winning their record 10th game in a row despite a spirited effort from the Roar who battled for the entire 90 minutes.

Newcomers City secured their first silverware in the competition by scoring 32 goals and conceded three over the 10 rounds so far.

Playing in front of a 1672 crowd that included Westfield Matildas Head Coach Alen Stajcic and national team midfielder and former Roar star Elise Kellond-Knight, it took only six minutes for the runaway competition leaders to open their account.

A free-kick on the left side of the box by Kim Little was not cleared properly by the Roar defence. The ball bobbled around inside the box and when it fell to City captain Lisa De Vanna, the Westfield Matildas striker cleverly crossed back to the left where an unmarked Little emphatically buried her shot into the Roar net.

Despite the early setback, the Roar didn’t drop their heads as the game swung from end to end.

City nearly went 2-0 ahead in the 19th minute when Roar defender Ruth Blackburn headed an Aivi Luik cross onto the Roar crossbar, only for the ball to deflect high and wide for a corner.

The Roar’s best chance to get back in the game in the first half was a 29th minute free-kick on the edge of box after Tameka Butt had been fouled. But Katrina Gorry, who has scored from that position many times in her career, skied her shot well over the crossbar.

The Roar dominated for the next 10 minutes but couldn’t turn the advantage into an equaliser and went into the break down.

Despite dominating for periods in the second half, the Roar couldn’t break through for the equaliser.

In the 83rd minute she made a superb diving save to deny Larissa Crummer from 15 metres, then seconds later bravely dived at the feet of Little who had broken through the Roar defence.