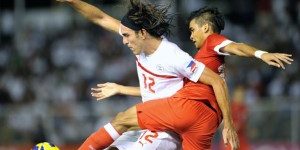 BANGKOK (27 June 2011) – Former champions Chonburi FC lagged behind on second behind current league leaders Buriram PEA at the end of the first round of the Thai Premier League 2011.

And this week while they managed to overcome Army United 4-3 in a thrilling encounter on the road, the Sharks are still seven points adrift of Buriram.

After 17 matches, Buriram have collected 42 points as against Chonburi’s 35 with Bangkok Glass on third with 31 points.

At the Army stadium, two goals from Brazilian striker Leandro dos Santos (11th and 90th minute) failed to inspire the homesters even though they did score another goal off Emmanuel Madengue in the 70th minute.