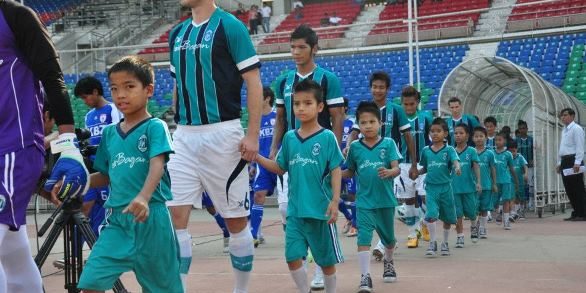 YANGON (31 March 2013) – Defending champions Yangon United lost further ground this week when they fell to a 3-2 loss at home to Kanbawza (KBZ) in the match that was played at the Youth Training Centre in Thuwunna.

The Myanmar champions in 2011 and also 2012 had conceded two defeats previously and with this latest loss saw the MFF Cup 2011 winners slumping to fourth at the table – three points behind current leaders Zeyar Shwe Myay.

KBZ were the first off the block with the lead from Soe Min Oo in the 10th minute before Yangon replied with the equaliser seven minutes later through César Augusto Hermenegildo.

But a strike from Tercio Nunez in the 27th minute ensured KBZ the 2-1 lead at the half.

Adama Kone then gave Yangon a lifeline with the equaliser just a minute into the second half but KBZ would have the last say when Nunez was again on target deep in injury time for the three points.

In the other game of the weekend, Ayeyawady FC were held to a 2-2 draw by Yadanarbon FC.

It was the visiting Yadanarbon who went in front first when Jacques Enama found the space to slot home in the 12th minute before Ayeyawady equalised through Leandro Duarte five minutes later.

Yadanarbon again went in front in the 62nd minute off Paing Soe but  Satoshi Otomo struck the crucial equaliser for eight minutes to the end to ensure Ayeyawady the one points.