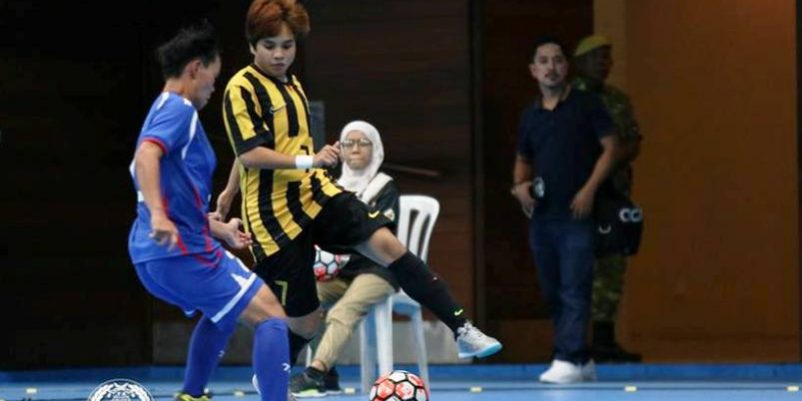 PETALING JAYA (31 July 2017) – Farahiyah Mohd Ridzuan, the captain of the Malaysian women’s Futsal team, believes that a gold medal is within the team’s reach even though the FA of Malaysia (FAM) has set a target of just winning a bronze at the SEA Games next month.

Futsal – either men or women – had always been dominated by Thailand who had hovered over the biennial championship for the last several years.

But with the return of Futsal to the SEA Games after it was given a miss in 2015, it has given renewed confidence at least in the women’s team that they might just upset the balance this time round.

The 24-year-old pivot who had also won the Top Scorer Award at the AFC Women’s Futsal Championship three years, remained sanguine that they might just upset the stranglehold of the Thais.

Thailand had made a clean sweep in the three editions that women’s Futsal had been held where they won the title in 2007 (Nakhon Ratchasima), 2011 (Jakarta) and 2013 (Nayptitaw).

“I think that our chance this time round is much better as other than the fact that we will be playing at home, we also have some quality players who are younger and much hungrier to win,” said Farah, whose team won the bronze in Naypyitaw in 2013.

“Now we have a balanced squad as compared to 2013. The understanding between players and also combination play is much better and I totally believe that we can give a good fight to both Thailand and Vietnam for the gold medal.”

For KL 2017, women’s Futsal will see the participation of five teams where other than Malaysia, Thailand and Vietnam, there will also be Indonesia and Myanmar.

They will compete in a round robin format before moving on to the classification matches with the top two teams vying for the gold medal.

Malaysia will open their campaign against Myanmar on 18 August to be followed by Indonesia (20 August), Vietnam (22 August) and then Thailand (27 August).