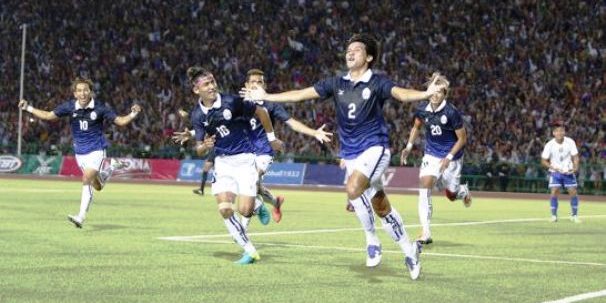 PHNOM PENH (9 June 2016) – Cambodia made the cut for the third round of the 2019 Asian Cup qualifiers when they beat Chinese Taipei 2-0 as ASEAN neighbour Laos were clipped 6-1 by India.

With the score tied 2-2 from the first leg, the Cambodians were all business at the National Olympic Stadium in Phnom Penh as Hong Pheng and Prak Mony Udom scored in either half in front of a sellout crowd.

IN THE MEANTIME, India overwhelmed Laos 6-1 to make the cut into the next round on 7-1 aggregate.

Khonesavanh Sihavong had taken the lead for Laos after just 16 minutes but India replied with two quick goals in the first half (Jeje Lalpekhlua in the 43rd minute and Sumeet Passi in the 44th) to put the hosts 2-1 in front.

The second half was all India as they piled on the goals through Sandesh Jhingan (48th minute), Jeje (75th), Mohammed Rafique (85th) and Fulganco Cardozo (89th).