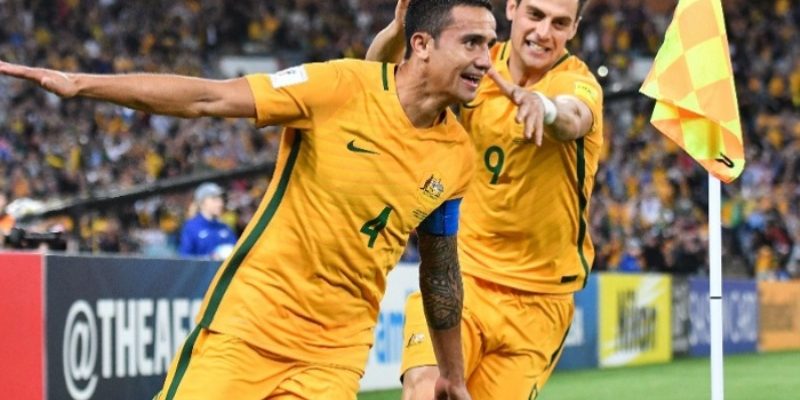 SYDNEY (11 October 2017) – Australia will be Asia’s representative in the FIFA World Cup Russia 2018 Inter-Continental Play-off after Tim Cahill scored an extra-time winner in a 2-1 victory over Syria at Stadium Australia on Tuesday that saw the Socceroos through with 3-2 on aggregate.

Omar Al Soma (pictured below) opened the scoring in the early stages to stun the home crowd before Cahill headed home his first of the night inside the quarter hour mark.

And, despite no further goals in regulation time, it was the veteran who had the final say after he nodded his 50th international goal past Ibrahim Alma in extra-time to confirm Australia’s meeting with the fourth-ranked team from CONCACAF in November.

The tie had been tightly poised ahead of kick-off following the 1-1 draw in Melaka on Thursday, but Syria needed just six minutes to cancel out Australia’s away goal advantage.

Tamer Haj Mohamad surged onto a loose pass and up the centre of the field, found Al Soma, who had bisected the Socceroos’ back three with his run, and the Al Ahli striker fired home confidently past Mat Ryan.

The hosts did not need long to restore parity, though, as on the 13th minute Tomas Rogic found Mathew Leckie down the right and the winger bent in a superb cross that Cahill stooped to head across Alma into the net for his 49th strike in Australian colours.

Australia would go on to enjoy the lion’s share of possession, but Alma and his backline held out to see the teams go in level at halftime.

After the restart, there were few clear-cut opportunities, although Leckie did see a header go narrowly wide and, with just over 20 minutes remaining, Rogic then drew a superb save from Alma after Leckie’s cut-back but that was the closest either side went before the full-time whistle and the additional 30 minutes.

Syria suffered a blow early into extra-time after they went down to 10 men after Mahmoud Al Mawas received his second yellow card for a foul on Robbie Kruse.

Substitute Nikita Rukavytsya had a golden opportunity at the end of the first half of extra-time when the ball reached him unmarked in the Syrian area, but his volley was hammered straight at Alma.

In the second half of extra-time, Aaron Mooy found Kruse with a delightful pass and his cross was headed home by Cahill to complete his brace.

Omar Al Soma – the last minute hero against Islamic Republic of Iran – then went close when he fired a spectacular late free-kick against the upright – but it is Syria’s 2018 World Cup dream that ends, while Australia’s endures.- http://www.the-afc.com/