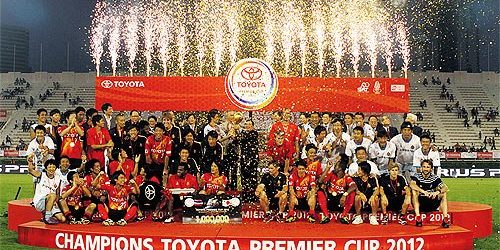 BANGKOK (17 Feb 2013) – Former Thai champions Buriram United’s hope of a grand start to the new season suffered a bump when they fell to a 2-0 loss to Japan’s Nagoya Grampus Eight in the annual Toyota Premier Cup that was played last night at the Supachalasai Stadium.

The Toyota Premier Cup is a one-off game between the Thai League Cup winners against the counterparts from Japan. It is the third time that the game is being held with Thai Port winners in 2011 while Buriram emerged champions last year.

But this time round, there was no way back for Buriram even though they had dumped Brisbane Roar of Australia a few days ago to reach the AFC Champions League group stage.

Jungo Fujimoto gave Nagoya the lead at the half hour mark before finishing the side from the north east with another strike eight minutes from time.