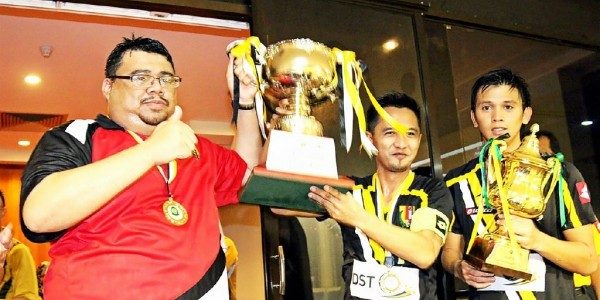 BANDAR SERI BEGAWAN (30 March 2015) – The Brunei DST League 2015 will start this week with Indera Sports Club all eager to defend the crown they won last year.

“We were in a good shape after winning the Sumbangsih Cup but I have to admit that with the two-month postponement of the league, it really affected our morale as well as our playing momentum,” said team manager Rosdin Abdul Aziz.

“However, there is still an advantage for us as it gave us more time for our import player (Sam Frank) to recover from his injury.

“At the moment our preparation is only made up of having friendly matches with some local teams, and I’m glad that our players who represented the national team in the recent World Cup qualifiers are back training with us.”

Indera will take on MS ABDB at the Hassanal Bolkiah National Stadium in Berakas on 5 April as newly-promoted IKLS take on Royal Brunei Police Force Sports Council (MS PDB) on the same day.