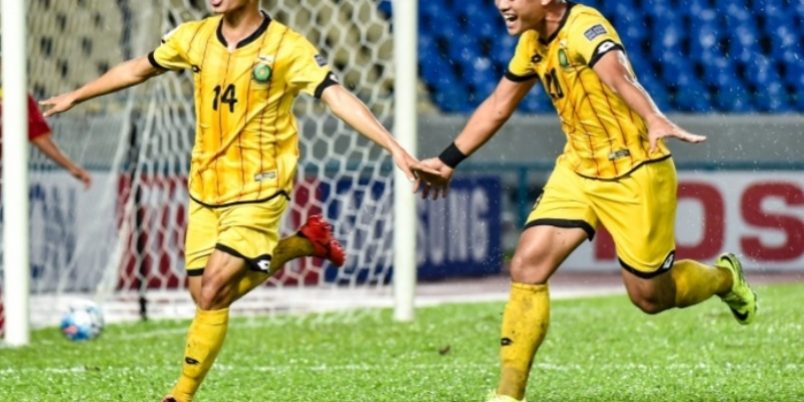 KUCHING (2 Nov 2016) – A second-half brace from substitute Azwan Ali helped Brunei Darussalam open their AFC Solidarity Cup Malaysia 2016 account with a resounding 4-0 victory over Timor-Leste in Group A on Wednesday.

In a tightly fought first half at a saturated Sarawak Stadium, Timor-Leste’s Rufino Gama twice came close as half-time approached, but Ali gave Brunei the lead shortly after the hour.

Ali then added another midway through the half before Shah Razen Said scored from the spot. Gama saw red on 73 minutes and Adi Said netted a wonderful free kick to round off the scoring.

Timor-Leste had the first sight on goal on eight minutes when Adelino de Oliveira played the ball down the line for Silveiro Garcia, who cut inside from the left and drilled over from 15 yards.

Brunei came back into the game and had a chance of their own shortly before the 20-minute mark as Azwan Saleh fired over the crossbar from the edge of the area after the Timor-Leste backline had failed to clear Asnawi Syazni’s cross from the left.

Brunei had Wardun Yussof to thank for ensuring the sides went into the interval level after the goalkeeper pulled off a wonderful save on 41 minutes.

Captain Jose da Fonseca’s chipped ball over the top skimmed off the top of defender Mohammad Najib’s head and into the path of Gama, but the striker’s cross-goal effort was tipped wide by an outstretched Yussof.

Gama then had another chance on the stroke of half-time when he curled wide from the edge of the area as Timor-Leste cranked up the pressure.

Kwon Oh-son’s side had the better of the opening second-half exchanges but struggled to create any chances of note as the tie remained scoreless on the hour.

Brunei then almost opened the scoring on 61 minutes when Shah Razen Said chipped goal-wards after the ball had slipped out of goalkeeper Fernandes Aderito’s hands but Oliveira was on hand to spare the custodian’s blushes.

A minute later, though, the sovereign state did break the deadlock when Ali raced onto a ball over the top and curled past Aderito.

Ali doubled his side’s advantage on 68 minutes as he finished from 10 yards after Aderito had denied both Adi Said and Shah Razen Said.

Brunei then put the game to bed with 20 minutes to play when Shah Razen Said scored from the spot after Nidio Alves upended Syazni.

Things went from bad to worse for Timor-Leste when Gama was sent off with 17 minutes remaining for a second bookable offence as Brunei threatened to run riot.