AFF SUZUKI CUP: Bring them all on, says Stange 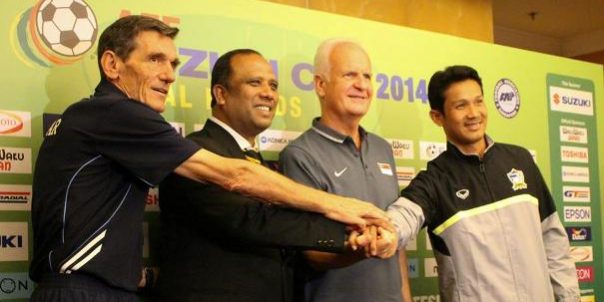 SINGAPORE (22 Nov 2014) – Singapore coach Bernd Stange rates Thailand among the strongest teams in Group B. His conclusion was based on their performances in the SEA Games, Asian Games and the series of friendlies which they played in the run-up to the AFF Suzuki Cup.

Under current coach Kiatisuk Senamuang, Thailand bagged the SEA Games gold and finished fourth in Incheon at the Asian Games and appears primed to launch a major assault on the AFF Suzuki Cup crown which they last won in 2002.

While Stange was impressed, he was quick to explain that past results did not mean much in this tournament. “I rate the Thais high but here, we all start from zero and past results no longer mean anything,” said Stange whose team will open their campaign against the Thais at the National Stadium tomorrow evening.

Stange, who took over the reins of the defending champions from Raddy Avramovic, said the Lions were ready. “The expectations are high as we are playing at home but we are ready to face anything. We are here to win.”

Stange also dispelled any notions that his team would be under pressure playing at home. “This is not a difficult question at all. It’s clearly an advantage to play at home. Most teams who play at home win their matches,” Stange said at a pre-match press conference here today.

Like Singapore, Thailand’s assistant coach, Klairung Theejagsang, said his team was also well prepared for the battle ahead.

“This is a tough group with the best teams, we have prepared for a long time for this.” Standing in for Kiatisuk, who was not feeling well today, Klairung told reporters he had a team of young players who were eager for success. “We have some young blood in the team and they want to do well.”