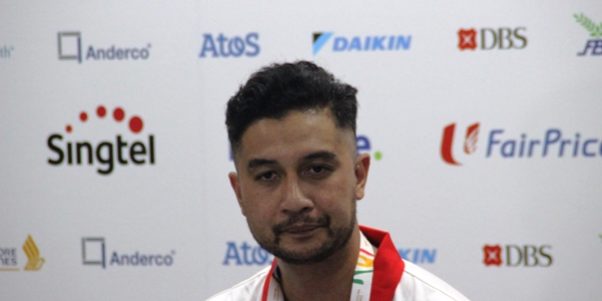 SINGAPORE (2 June 2015) – Singapore Under-23 coach Aide Iskandar has come out in defence of his players following their hard-fought 1-0 win over the Philippines last night in the opening game of Group A here at the SEA Games.

The Singapore frontmen – Muhammad Sahil Suhaimi and also Muhammad Faris Ramli – were presented with a hatful of gilt-edged chances but it would seem that they had left their scoring boots at home.

In the end, it took a header from defender Shaikh Abdul Hadi Shaikh Othman to settle the score as Singapore picked up their first three points in the group.

“I believe that the players and the whole team want to do well for the fans, for the country and also for themselves. They tried really hard but things just did not happen,” said Aide.

“But we have to continue to give the players the support they deserved. They did not fail for the lack of trying. They created chances after chances and that is a good sign.

“On paper, everyone is saying that we should have won by at least three of five goals but it is not that easy.”

On the other hand, Philippines coach Marlon Maro could not have been more than pleased with their performance despite being unable to pick up at least a point from Singapore.

He said that conceding a goal just before the break had an adverse effect on the players where it made things even harder.

“We were already playing against the hosts and the first match of the competition is always difficult. The hosts teams were very enthusiastic,” added Marlon.

“I know that we could keep ball possession and passed it around – that is what we have been training for. It was just too bad that we could not score when we had the chance.

“The scoreline did not reflect the manner with which both teams played but I’m glad that we had a great first game which we can carry to the next.”