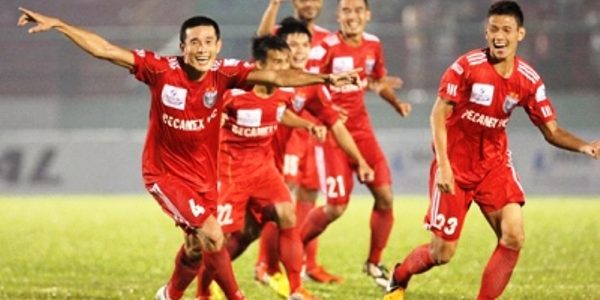 HANOI (9 July 2014) – A 4-1 thrashing of former champions Hoang Anh Gia Lai moved Becamex Binh Duong to the top of the V-League as they drew level on the same 39 points against defending champions Hanoi T&T.

Playing at home at the Go Dau Stadium, homesters Binh Duong pressed hard at the start and just 23 minutes in, they earned a penalty that was put into the back of the net by Abass Cheikh Dieng.

Abass then doubled the lead for Binh Duong with the second goal on 43rd minute as Suleiman Abdullahi then made it 3-0 just after the restart.

Troang Hoang then completed the humiliation for HAGL with the fourth goal of the game in the 54th minute as striker Tran Duc Duong pulled a goal back for the visitors right at the death. It was HAGL’s seventh loss of the season and where they have not won a match in the last six.

Elsewhere, champs Hanoi T&T lost their position at the top of the table after a pulsating 3-3 draw against Dong Tam Long An.