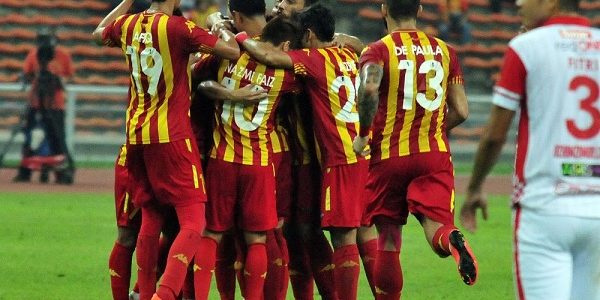 KUANTAN (13 Sept 2015) – Defending champions Pahang held off Police for a 4-3 win in their opening Group D Malaysia Cup match at the Darul Makmur Stadium in Kuantan as the country’s oldest football tournament went into full swing.

And this despite the controversy surrounding the FA of Malaysia (FAM) following the threat of being suspended by the Minister of Youth and Sports Khairy Jamaluddin for the national team’s debacle.

Putting that aside, there were shocks on the football pitches as former greats Selangor felt the full brunt of Kelantan at the Shah Alam Stadium – the very venue where Ultras Malaya caused mayhem during Malaysia’s World Cup qualifying round match (Asian Zone) against Saudi Arabia last Tuesday.

On Saturday, the Red Warriors dented multi-time winner Selangor’s pride with a convincing 3-0 win in a Group C tie. The painful defeat could see the Red Giants chasing shadows again in their “Mission 33”, having won the most sought after silverware a record 32 times.

Brazilian hot shot Gilmar Da Silva paved the way for Kelantan’s convincing win with a brace in the 26th and 54th minutes. In between Nigerian striker Austin Amutu got the second for Kelantan in the 49th minute.

In the same group Felda United signalled their intentions of going far in the Malaysia Cup with a 3-0 whitewash of Terengganu outfit T-Team. The plantation giant goalscorers were Australian Ndumba Makeche (26th and 54th) while former international Indra Putra Mahayuddin got one in the 49th minute.

At the Darul Makmur Stadium, international Azamuddin Akil was too hot to handle for Police. Azamuddin came out with his guns blazing and fired a hattrick – the first in the Malaysia Cup this season – getting his goals in the third, 35th and 66th minutes.

Police the match a thriller and made it 3-3 by the 76th minute with goals by Dramane Traore (12th), Ashfaq Ali (71st) and Celestino Bragance (76th).

However, Pahang’s ace in their pack Dickson Nwakaeme turned hero for the Elephants with the winner on 81 minutes – minutes after coming off the bench and give the champions a winning start in Group D.

In another Group D match PKNS FC outplayed Penang 3-0 at the City Stadium. The Selangor outfit were 2-0 up after 18 minutes with goals by Mohd Nazrin Syamsulbahri (16) and Gabriel Guerra. Nizam Abu Bakar hammered the final nail into the Panthers coffin with the third on 56 minutes.

In a Group A encounter Lions XII were held to a 1-1 draw by newly promoted Kedah at the Jalan Besar Stadium. Kedah scored first through Sandro Mendonca (16th) before Shahdan Sulaiman made it all square a minute later.

Lions XII coach Fandi Ahmad was a disappointed man with the stalemate and said: “It was a poor show by us. I am very disappointed with the outcome.”

His Kedah counterpart Tan Cheng Hoe was more than happy with the precious point on artificial turf.

“It was a high intensity match and both sides gave money’s worth performance, Of course I am happy that we were able to take a point home.”

In another Group A match Premier League side JDT II returned home with a point after hold Super League’s Terengganu to a scoreless draw at the Sultan Mizan Zainal Abidin Stadium in Kuala Terengganu as the homesters paid a high price for a muffed penalty by Gustavo Lopez.

In the only Group B match played at the State Stadium in Kuching , Sarawak garnered full points – thanks to a last minute goal by international Joseph Kalang Tie just when a draw looked the best outcome.

Group B favourites Johor Darul Takzim, the Super League champions had earlier defeated Perak at the Larkin Stadium on Friday.