Australia through to quarters as Marta’s Brazil sent packing 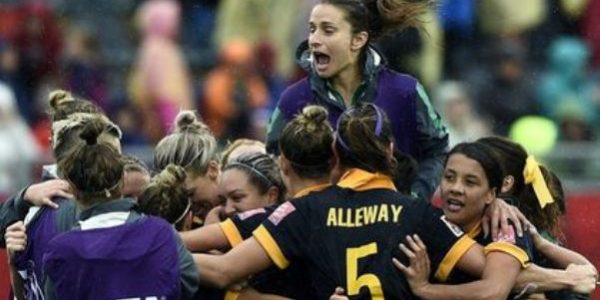 SYDNEY (22 June 2015) – Substitute Kyah Simon scored for Australia in a shock 1-0 defeat of Brazil on Sunday as France demolished South Korea 3-0 and next meet Germany in the quarter-finals of the Women’s World Cup.

Simon, 23, found the way through after 80 minutes of battle in wet and windy conditions in Moncton against the 2007 runners-up captained by former five-time world player of the year Marta.

“I think exhilarating is the word for such a victory against a big, powerful football nation,” said coach Alen Stajcic of Australia’s first win in a knockout round at the World Cup.

“Being in the right place at the right time is what makes great players and Kyah Simon showed that today,” said Stajcic.

Australia next play either reigning champions Japan or the Netherlands in Edmonton for a place in the semi-finals as seventh-ranked Brazil again return home still awaiting a maiden title.

In Montreal, Marie Laure Delie scored a brace and Elodie Thomis was also on target to put the third-ranked French through to a last-eight meeting with world number one side Germany.

France coach Philippe Bergeroo suggested his side had been even restrained in their scoring against outclassed 18th-ranked opponents.

“It’s a good result, we got off to a good start while respecting this Korean team,” he said.

“The girls made things easy for themselves. They had an extraordinary start to the game.”

Bergeroo said France were now ready to take on Germany — winners in 2003 and 2007 — who demolished Sweden 4-1 in their last 16 game on Saturday.

“It’s an enormous challenge but the pressure isn’t on France. We have no injuries and can prepare calmly for this clash.”

South Korea, who had advanced second out of their Group E behind Brazil, were no match for France.

The second half was more of the same with Delie picking up a Eugenie Le Sommer cross on front of goal three minutes after the break.

“They have a lot of quality and will go far in this tournament.

“The match didn’t go according to plan. We conceded three early goals and went away from our game plan.

“Our defence was not able to resist.”

It is just the third time France are playing in the World Cup — they finished fourth in Germany in 2011.

Brazil, two-time Olympic silver medallists, were hardly tested in their group as they defeated Costa Rica, Spain and South Korea, without conceding a goal.

In New Brunswick, they fought a tight first half with Australia, with Marta, Andressina and Formiga all missing the target.

Formiga, who at 37 became the oldest player to score in the women’s tournament in their first game, had Brazil’s best chance of the first half — but her curling effort was tipped over by goalkeeper Lydia Williams.

But Brazil came to life around the hour mark.

Marta, 29, missed another chance to add to her World Cup record 15 goals when she fired wide, as a Formiga header bounced back off Williams’ near post.

Stajcic brought on Sydney FC player Simon after 64 minutes and it paid off with ten minutes to go.

Captain Lisa De Vanna had her shot punched out by Luciana in the Brazil goal straight into the path of the onrushing Simon.

It was Simon’s third goal of the tournament after her stunning double against Nigeria in the group stage.

It is the third time that Australia have reached the quarter-finals after 2007 and 2011, but they had never won a knockout round match before.