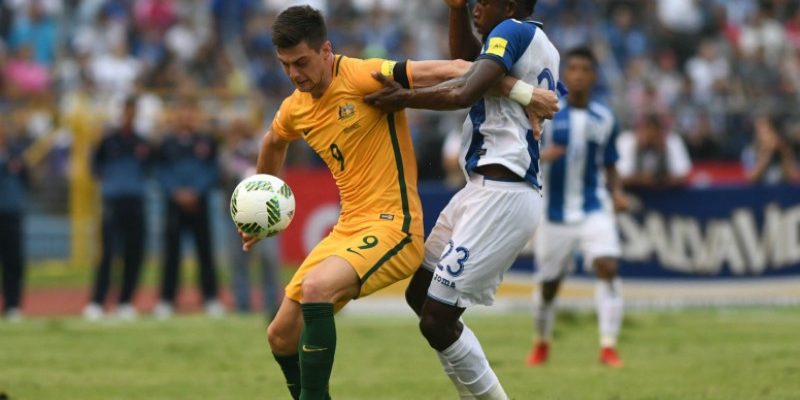 SYDNEY (11 Nov 2017) – A dominant display from Australia against Honduras has left their FIFA World Cup 2018 Russia Intercontinental Play-off evenly poised after the two teams played out an entertaining 0-0 draw in the first leg at the Estadio Olimpico Metropolitano in San Pedro Sula.

Both teams were greeted by a wall of noise by the passionate Honduran fans, but they were silenced early as the Socceroos started the brighter of the two teams, and despite a few nervy moments early on, steadied to take control of the match.

Aaron Mooy was masterful in midfield, displaying his full array of talents, controlling the ball with expert precision as the first half went on, while Massimo Luongo and Mile Jedinak were both industrious as they repeatedly stymied the home side’s attacks.

Australia’s first chance of the afternoon came when Luongo glided his way into the box, firing off a left-footed shot that was well saved by Donis Escobar.

On the half hour mark Jackson Irvine fired a volley over the bar, but it was Switzerland-based striker Tomi Juric who had the best chance for either side in the first half.

With a sublime flick over Honduran defender Henry Figueroa, Juric found himself through one-on-one with Escobar, but with just the keeper to beat he inexplicably pulled his shot wide, much to the frustration of Socceroos coach Ange Postecoglou and the entire Australian bench.

Juric spurned another chance 10 minutes into the second half after Luongo dinked in a cross, but the FC Luzern forward could only direct his header straight at Escobar, who tipped the header over the bar.

Australia’s domination deserved a goal, but their profligacy hurt them on the night and just after the hour mark they should’ve taken the lead, but after gliding past the Honduran defence to get into the box, Josh Risdon’s cut back was behind the Australian attack and another chance was wasted.

Australia were almost made to pay for their wasted chances when Carlos Costly broke away with 10 minutes left to play, but his left-footed effort was well saved by Mat Ryan.