Australia and Malaysia Make Final Rounds of 2016 AFC U16 Meet 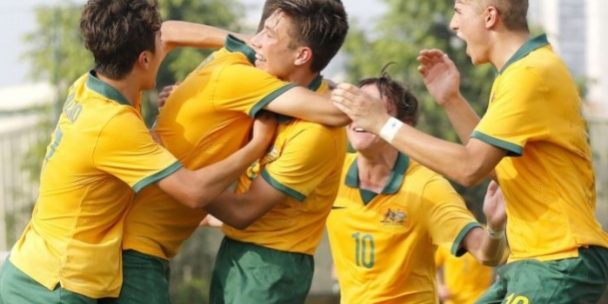 SYDNEY (21 Sept 2015) – Australia and Malaysia have confirmed their places for the 2016 AFC U-16 Championship which will be held in India next year.

Australia scored a close 1-0 win over Vietnam in their final game in the grhelped the Joeys claim top spot in Group J.

After previous wins over Guam and Myanmar, a first half goal from defender Mersim Memeti proved the difference as the Australians secured the vital first place finish ahead of their Southeast Asian opponents.

Next year’s appearance will be the fifth time Australia have featured at the AFC U-16 Championship having previously reached the semi-final stage in 2010 and 2014, and the quarter-finals in 2008 and 2012.

In the meantime, Malaysia came from behind to draw 1-1 with Laos to qualify for next year’s AFC U-16 Championship in India by topping a closely contested Group G.

Following earlier wins against Northern Mariana Islands, Timor-Leste and the Philippines, Malaysia went into the game knowing that anything but a defeat would confirm their passage through to the finals.

However, it was Laos, who could themselves have sealed first place in the group with a win, that were to draw first blood when they went ahead shortly before the break courtesy of Boualapha Chaleunsouk’s goal.

It was not to be for Laos though, as, amid high drama, substitute Azrin Azahari struck with only a minute gone in the second half to ultimately seal a vital point for the Malaysians and condemn the valiant Laotians to a second-placed finish.

Eleven group winners and four best second-placed teams will join India in next year’s finals, with the tournament hosts receiving an automatic qualification.