ASEAN Must Support Own Clubs 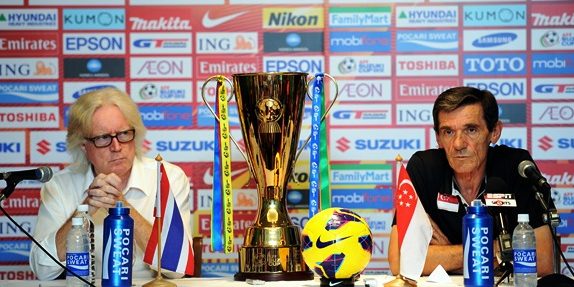 SINGAPORE (28 Dec 2012) – Outgoing Singapore coach Radojko Avramovic said that for football to grow to the next level in ASEAN, it is important that people start supporting their own local clubs.

He said that it is pointless to hope that football will grow through the biennial ASEAN championships, when immediately after the tournament is over, people return to supporting clubs in Europe.

“They have to realise that there is a direct co-relation between supporting local clubs and to the success of the respective national teams,” said Avramovic.

“If football in ASEAN wants to grow and compete at the same level as the better ranked teams in Asia, then the people must take pride in their local teams.”

This sentiment was also reiterated by his counterpart from Thailand – Winfried Schaefer.

He said that it is his mission to make the people of Thailand takes more pride in their own local clubs like Muang Thong United, Buriram United and Chonburi FC.

“There have to be more pride in wearing jerseys of the local team instead of those from England, Italy or elsewhere,” quipped Schaefer. “They should show the same pride when they are wearing the national jersey.

“While Thailand might not have won the AFF Suzuki Cup, I believe that we have managed to inspire the young players around the country to the new heroes in the national team.

“And hopefully, more and more people will start wearing jerseys of the local teams. That will bring the Thai game to a whole new level.”

‘We have to fully focus on this final preparation phase’ – Yoshida
November 17, 2021