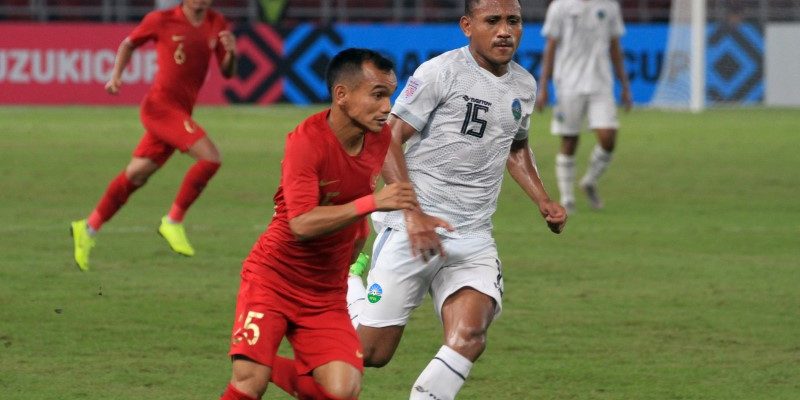 JAKARTA (13 Nov 2018) – A nervous Indonesian side overcame the jitters to beat Timor Leste 3-1 in a Group B tie of the AFF Suzuki Cup that was played at the Gelora Bung Karno Stadium here tonight.

What made the win more fabulous was the fact that they had to come back from a goal down before they were able to pick up their first full points in the group.

“The players were anxious for the early goal and that put us under a lot of pressure,” said Indonesian head coach Bima sakti.

“But I was proud of the players and the way they came back from being a goal down and how they rallied in the second half.

“The win is just a win. There’s nothing more to it. I told the players that they should not get carried away where now it is important that they concentrate for the next match against Thailand.”

After making the finals of the AFF Suzuki Cup two years ago, a bad start against Singapore was not what Bima had expected and that defeat seemed to have added pressure from an expectant Indonesian populace.

And this evening in front of close to 15,000 fans, the team tried to play their usual game but was hampered by a determined Timor Leste side bent on proving that they are a better side that the one that conceded seven goals to Thailand.

Nothing seems to work for Indonesia in the first half as Andik Vermansyah, Evan Dimas Darmono and also Beto all failed to make it count with their last touch.

But just three minutes into the second half, Timor served a surprise when Rufino Walter Gama slammed in the lead with a well take one timer.

The change for the diminutive Riko Simanjuntak changed the pace for Indonesia as his crosses caught the Timor defence flat footed and just a minute after the hour, Alfath Faathier ran in from the left before unleashing a wicked grounder that came off Timor keeper Fagio Da Silva Pereira for the equaliser.

Seven minutes later, Indonesia earned a penalty when Andik Vermansyah – chosen as Honor Man of the Match afterwards – was brought down inside the box as Stefano Lilipaly did not disappoint from the spot.

Riko made sure of the full points eight minutes to the end with a floater that was headed in by Beto.

“We made many mistakes in the second half and that resulted in the loss tonight,” said Timor Leste head coach Norio Tsukitate.