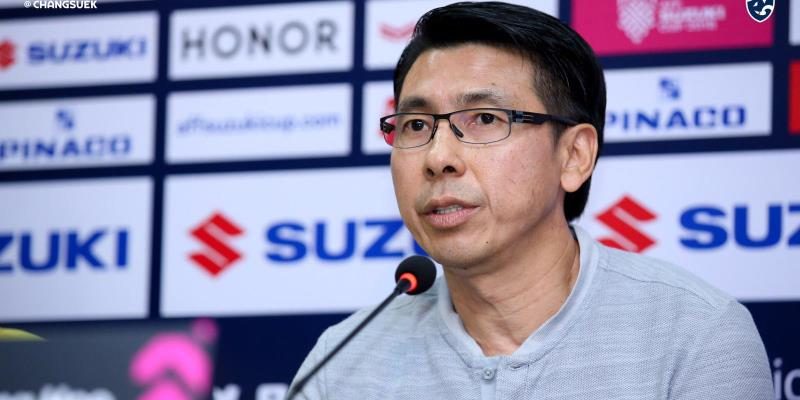 BANGKOK (5 Dec 2018) – It was an amazing night for Malaysian head coach, Tan Cheng Hoe after his team came back twice to hold Thailand. To top it all off, they conceded a penalty in the dying moments but survived to fight another day when Thai striker Adisak Kraisorn blasted over the crossbar.

“For the first 45 minutes, they played very well, then in the second half, we needed to be composed and at the same time be focussed on the counter-attacks and sometimes the set-pieces from the Thais. For the second half, they played according to the plan and had good tactical discipline. It was an amazing result,” declared Cheng Hoe.

Having been part of the victorious Malaysian team of 2010, but then as an assistant for Datuk K. Rajagopal, Cheng Hoe knows what its like to be the winner of the region’s most coveted football trophy.

“Once it comes to the final, we need to make full use of the chances at home. We need to keep playing the way we are, the boys must keep the momentum going.”

Meanwhile, Norshahrul Idlan Talaha, like Cheng Hoe was part of the 2010 winning AFF Suzuki Cup team, thanked his coach and his family for their continued support. “I want to firstly thank god. I thank the coach, my wife and kids who have all believed in me and encouraged me pursue my career at this high level. Thank you also to my teammates who gave more than 100 percent for us to qualify for the final.”

A disappointed Thai head coach Milovan Rajevac made a good point that his team had not lost any matches but were out of the running. “I’m not satisfied since we did not qualify, but it’s another experience for the players. I want to congratulate the Malaysian team, they deserved to play in the final. We have to forget this as soon as possible, we have to concentrate on the Asian Cup, we will have other players joining the team, who could not come for this tournament.

“After both matches, definitely the Malaysian showed more determination and aggressiveness, they wanted this match so much. Today, we were leading twice, both times we did not manage to sustain the Malaysian team. In the end, we had the penalty, we did not use it, a little bit unbelievable but that’s football.

“Unfortunately, we did not convert the penalty, so unlucky in the end. He missed but he has our support. “